Akane Chiyoko(あけいん ちいおこ Akein Chiioko) is an Independent Mage that often travels alongside her partner and fiance, Zaraki Goken, and often known to be one of the most persuasive woman in the entire Ire region. She was originally one of the lead-negotiator for the Ire Government, until one day she ended up losing one of the most important negotiations in her career, resulting in her losing her promotion. She later quit the job, taking up the role of the Independent Mage to make her way in life. On one of her jobs, she met up with Zaraki as the two began to fight each other in order to determine who was gonna win their match. It ended in the draw and the two discovered a love for each other. They stayed together, doing jobs and helping other people out when they could, and they even joined the same guild together, Blazing Soul when they met up with their guild masters.

Akane is a fair-skinned woman of tall stature who generally wears a stoic, aloof expression on her face. She has blue eyes and straight, blonde hair framing her face cut in an asymmetrical bob style with the front bangs reaching her shoulders. She wears a very low-cut outfit which displays her sizeable cleavage, with mesh armour underneath, a short skirt and red hand guards, high boots, and often wears shirts that exposes her clevage. She originally wore official government clothing that often showed her status as the Negotiator for official affairs, but after her first lost, she was stripped of her title and rank, resulting in her returning the uniform.

Despite her cold apperance, Akane is actually a very social person that often spends most of her time with her fiance or any members of her guild at nost times. In very hostile situations, Akane is considered one of the most collective in the guild, due to the fact she often had to work in warzones to negotiate with both armies. Rarely does she ever lose her cool, but when she does, her anger often leads her to fighting against the person who angered her with the intent to kill and slaughter them.

Counter Magic - Is a Caster Magic that allows the users body to memorize the attack that they were hit with, temporarily augmenting the users' own magical energy to twice that of the opponents attack, until the user attacks back. The user's next attack will have twice as much speed and strength as the memorized attack. The drawback to this magic is, that the user must take the opponents attack head on for the attack to be memorized.

Wave - Is a Caster Magic that allows the user to create waves out of vibrations and can cause explosions when the vibrations hits somebody else's Magic. These waves can be thrown as projectiles, and the user also seems to be able to change the length and width of these waves.

Genius Intellect - Ever since she was a little girl, Akane has been known for her unique insight into things that most young girls wouldn't be able to understand till they become adults. In most cases, her memory was her strongest resource as she is able to memorize anything after reading it only once. Her test scores got her through school with ease, making her one of the youngest to graduate from college at age 18. She later went to work for goverment affairs as she believed to be one of the few people that could make a difference in the community, eventually taking her spot as the government's top negotiator, till she was stripped of that title. 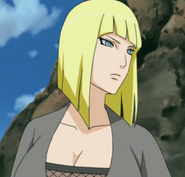 Meeting Kin for the first time

Akane caught by Zaraki in fight
Add a photo to this gallery
Retrieved from "https://fairytailfanon.fandom.com/wiki/Akane_Chiyoko?oldid=117141"
Community content is available under CC-BY-SA unless otherwise noted.