Claw Gauntlets
Aki Li(あき り Aki Ri) is what's known as a underground Dark Mage like her brother, who stays out of the spotlight in order to keep her illegel buisness hidden from wandering eyes. She is the daughter of Aki and Jericho Li, who were former slaves that began their business in the same thing they themselves went through. She is the sister of Domi Li and Mizuki Li, however she has no idea about her sister's idenitty.

Unlike her older sister, Aki is shown to have much darker skin and greener hair than her. It has also been seen that Aki often wears a scarf given to her by her mother, who was originally going to give to Mizuki when she got older. Along with that is shown to be an orange shirt, matching skirt, and heels.

Unlike her brother, Aki is shown to be the spoiled rich brat who was given everything to her when she was younger, which drove her parents crazy. The more she was spoiled,  the worse it became from simple greed to pure hatred towards all people including her parents who raised her.

Mistakes: The Past, Present, and Future Arc

Combination of Past and Present Power Arc

After Mai and Jericho were financially successful with the slave trade and sending their only son to an academy, they were blessed with another child, they decided to name her Aki Li. Unlike the relationship with their son, Mai and Jericho were more involved with Aki's deveopment, trying to make up for the horrible actions they did to their first daughter, Mizuki Li. For Aki, she was shown to be the happy child of the family, more loved by anyone in the enitre household, and never even questioned why her parents had people living outside their house.

Around the age of four, she met her brother for the first time since her birth, and was excited to meet someone she could play with aside from the slave children. However, when Domi met her, he immedatly showed his hatred towards his sister,  breaking her spirit in the process.

After that day, she swore to never allow anyone to play with her feelings ever again, and decided to become someone better than her parents and brother. She demended that her parents find someone to teach her magic when she found out  that she was born with magic inside of her.

Years later, she became an underground Dark Mage, not wanting to be in the spotlight, and later took one of the many landscapes that her parents owned, opening a town filled with only slaves known as Lilo. When her sister, Mizuki Li, paid her a visit, the sisters went all-out beating each other to their limits. The fight ended with Mizuki as the victor and Aki being left to have a chance to start over again. Udon then appeared offering her a chance to become better, which she gladly accepted.

After two weeks of traveling, the duo made their way to Gran Soren, where they rescued her older brother, Domi Li, and convinced him to join along side them. The trio disappeared after that.

Ice-Make - is a Caster Magic that allows Aki to create and manipulate ice into anything that comes into her mind.

Requip - is a Holder Magic that allows Aki to reach into a pocket dimension and pull out items that she stores in them, including her cloak, fox mask, and claw gauntlets. 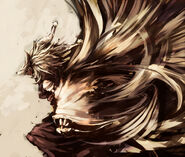