"My innocence died the day Oliver did. Now move out of my way or I'll cut you down"

Arianna LaRousse (アリアナ·ラルース Ari-ana· rarūsu) is a female Elf mage of the guild Griffin Heart. She specializes in swordsmanship and Fairy Magic and was nicknamed the Fairy of Crocus (クロッカスの妖精 Kurokkasu no yōsei) because of it. Arianna was also a founding member of Team Bingo before Oliver's death.

Arianna is a bright and intelligent young girl. She is spunky, full of energy and loves adventure. She is definitely an extrovert, who just loves to talk with people. She enjoys reading about history and stories about Earthland. She is passionate and driven and never gives up on her goals. She is a bit clumsy, but is headstrong and stands up for what she believes in.

After Oliver's death, Arianna has gone through a dramatic transformation.While still managing to hold onto her bubbly energy, it's no doubt that she's become more serious and focused as well as cutthroat. She has pushed herself to train harder and become stronger. She is more defiant and rebellious and will voice her opinion whether it's nice or not.

Oliver and Arianna had somewhat of an awkward first meeting. Arianna had seen Oliver around town a couple of times before confessing her love towards him to which he declined. Eventually, the two would end up working together to stop a few bandits and with her request, joined Griffin Heart. The two developed a love-hate relationship with Oliver often criticising and often trying to correct her while Arianna teased and put him in strange scenarios. They really started bonding in battle when Arianna took the lead with Oliver providing backup which she wasn't used to. When Oliver turned, Arianna couldn't comprehend it. Although it was his own life, Arianna couldn't dare see a friend go down the wrong path. Her willpower was enough to reach Oliver and the reason Oliver didn't completely lose himself. She pleaded with Oliver not to sacrifice himself and was in tears his final moments.

Arianna treats Boram like a toddler and often overestimates him or talks to him in a condescending manner. Regardless of their many pointless arguments, she loves him to death and would lay her life on the line for him. After Oliver's death, Borama nd Arianna ceased communicating.

Sho is more of an older, protective brother to Arianna. After rescuing her from Bosco sex traders, the two have remained inseparable. Their bond was so strong that is persuaded Sho to stay in Crocus, Fiore when his Casino was in Lumber City, Bosco. After Oliver's death, Arianna and Sho grew distant.

Arianna treats and loves Nemo like a little brother. The two are extremely close and have a strong relationship. After Oliver's death, Arianna and Nemo both found themselves training harder and working on their teamwork skills.

As her father, there are times where Arianna simply can't stand him to the point that she purposely does things dangerous to make him squirm. From the start, Gervase hasn't liked Arianna becoming an adult nor a mage who is capable of making her own decisions. Ever since she got kidnapped for Bosco's sex trade, Gervase has been extremely hesitant towards lettering her do things which put a strain on their relationship. After Oliver's death, Arianna rarely gets along with her father, let alone speaks to him.

Jurei and Arianna are fierce rivals even though they are from two different countries. The two are almost constantly bickering over things like beauty and strength.

Riley is Arianna's older cousin by a year. Because he is constantly on the move, Arianna feels as they don't have a good relationship.

Since the age of 6, Arianna has practiced her magic and swordsmanship skills. When Arianna was 13, she was kidnapped by Sex Traders and taken to Bosco to be sold. Sho saved her and brought her back to Crocus. She convinced him to join and they've been inseparable.

Master Swordsmanship: Arianna's skill with a sword is truly remarkable. She has honed the skill by being able to fight mid-flight.

Enhanced Reflexes: As a swordsman, Arianna's senses perked up so she could defend incoming attacks.

Enhanced Sight: When flying in the air, objects tend to appear smaller and farther. So, over time, Arianna has gained the ability to see farther. Additionally, due to the constant exposure to the sun's bright lights while in the sky, Arianna is able to see through flashes and bright lightning.

Fairy Magic (妖精魔法 Yōsei Mahō) is a Caster-Type Magic used by Arianna. In order to use Fairy Magic, the user releases yellow fairy dust from their body which can be then used for different techniques such as making explosions or concentrating it and shooting it as energy needles. She has stated to have already have mastered the magic since she has practiced for years. Arianna's greatest skill when it comes to this magic is being able to create new forms that inspired by other people's magics.

Oliver Feldspar: Ever since his death, just the mention of his name as been an emotional trigger for Arianna. She doesn't want to talk about him and threatens anyone who insults him.

Arianna with her sword. 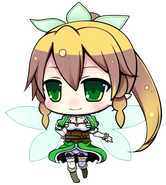 Arianna in the Chibi Spirit World.

Arianna in her dream.

Add a photo to this gallery
Retrieved from "https://fairytailfanon.fandom.com/wiki/Arianna_LaRousse?oldid=605904"
Community content is available under CC-BY-SA unless otherwise noted.