"You want me to do WHAT? I don't know about you gentlemen, but for sure as hell I am not givin' up because some dark-mage-dude asked politely!"

" I hit him harder than I should. Not sure why. It worries me that it feels so right."
— Barthram

Barthram Severne (酷栄光のカラス, Severne Barthram; lit. "Strict Glorious Raven") is a fairly young mage with an undetermined history and lacks any degree of affiliation with any proper guild. Severne is currently a wanderer and is well known overseas due to his extremely "pervert" escapades. He is one of the very few neutral mage's around in the kingdom of Fiore and it is his ambiguous morality and unreliable nature that makes him infamous among his "so called" peers. Barthram is one of the few mage's who are struggling to find their moral compass and his inner conflict often causes people to underestimate him but his potential and natural skill for fighting makes him one of the most formidable foes of his age.

Initially, Barthram was fairly short for his age, and had a slight, lean, well-toned build, since he was an acrobat and skilled at combat and use of magic with his physical prowess. His short grayish white hair was left unkempt, hanging over his forehead. He did however, admit to intentionally using gel to make his hair look messy in order to compensate for his eye brows which were comparatively thin and long. He typically wore a pair of glasses, contacts and even sunglasses to hide his red eyes as they were considered to be scary. His oval-face became more heart like due to his jawline becoming pointed as time passed.

After the brief time skip, his jawline is now well defined and much more pointed with a pointed chin, slightly wide and high cheeks and finally, a broader forehead which he continues further cover with his now medium length wavy hair. Surprisingly after the timeskip, his skin has become pale and his crimson red eyes turned pinkish; something he flaunts instead of hiding but most notably he's grown considerably taller, having roughly the same height as his mentor and gaining a highly increased muscular tone, especially in his upper body. Despite gaining several pounds of muscle, he continues to be leaner compared to his fellow peers and this is perhaps why he is faster than his fellow subjects.

His lean, well defined and attractive physique has been a topic for ladies around him and he apparently enjoys being complimented. He currently stands 183 cm/6'0" tall and weighs just over 175 lbs. Barthram also has a tattoo on his back and it was apparently given to him during his time in the Execution's Isolation Facility; the tattoo reads as "内容な" which means "subject seven" and given that his cell mate had a similar tattoo reading subject nine would imply that all of the subjects were branded. Barthram Severne has shown to wear a variety of clothes, however, he tends to gravitate towards lighter colors.

Despite his scars, he has a great skin and never suffered from zits. However, his casual attire is ever changing and as of now, he has never been seen wearing a head-protector. His most common attire consists of a formal half sleeved shirt, a black hoodie like cardigan and denim pants. This attire is complemented by either loafers or standard boots. It is unknown to as how his tattoo has not been eliminated like his injuries are it has been hypothesized that it was made at a much faster pace than he can heal or perhaps it was given to him prior to the enhancement project. Given that his childhood and teenage incarnations has refused to take off their clothes, it is very likely that he was branded at an young age and was embarrassed of his mark.

His current clothes are magical in nature and were given to him by a mystery person, as such, these clothes deflect weak physical attacks and prevent mind control being used on him/ However, it cannot stop curses or other magical attacks. 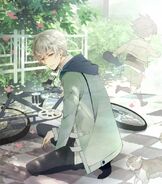 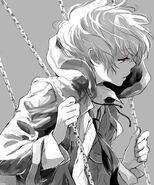 Due to the mage-enhancement program, which was an off the books project by a secret society of armed and militarized mages called Execution, Barthram is an enhanced human. He is actually cloned from the genes of their most successful experiment subject, that is, subject six and was grown into the womb of an unnamed woman who was apparently a strong mage herself and her sole purpose was to give birth, raise him and turn him into a weapon. Using cloning techniques and genetical engineering techniques combined with magic, they turned Severne into the perfect human weapon.

Retrieved from "https://fairytailfanon.fandom.com/wiki/Barthram_Severne?oldid=312142"
Community content is available under CC-BY-SA unless otherwise noted.