Black Star(ぶらくすた Buraku Suta) is a Guild Ace and S-Class Dark Mage of the all-female Angry Angels Dark Guild. She was found by the Guild Master Morgana Edgeworth as a baby and was raised by her. 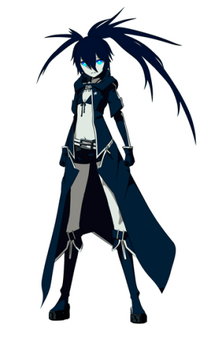 Black Star is a girl of short stature and petite body. She has long straight black hair and deep blue eyes. When she uses magic, her left eye burns with blue fire. She wears a pair of knee high black boots, a black bikini top, black short shorts with a light gray belt, and a black hooded jacket with a long back with a white star on the back.

Black Star is silent and reclusive. She rarely speaks and prefers to be alone. That is mostly due to the fact that being the daughter of a Dark Guild Master she has not had much interaction with the outside world. Her adoptive mother Morgana Edgeworth trained her from very young in order for her to be able to protect herself.

Surprisingly she does like cats and finds anything cute difficult to deal with. Also, despite her reputation she is actually a very gentle and shy person.

Not much is known about her history other than the fact that she was found and trained by Morgana Edgeworth and later joined the Angry Angels Guild as well become its Guild Ace.

Requip (換装 Kansō): Black Star uses an intermediate form of requip that allows her to store her gun and katana for when she's not fighting. She can store almost anything, except armours and objects beyond her own physical capabilities.

Celestial Spirit Magic(星霊魔法 Seirei Mahō): She is very proficient in this magic.

Retrieved from "https://fairytailfanon.fandom.com/wiki/Black_Star?oldid=247985"
Community content is available under CC-BY-SA unless otherwise noted.