Looking for a guild

Blize (ぶらいず Buraizu) is a former mage of the guild Phantom Feet and a mage fighting as one of the Phantom Feet Sins. She abandoned it after her master sacrificed her friend and linked her to Westa Fire. Now she trains in Training Branch N-3

Blize has two forms. When she's in normal form-she wears a black costume partially discovering her breasts and legs. She has got long, blue hair adorned by a ribbon.

Blize wears long, white sleeves with buttons and big, blue-white-black boots. When she was in Phantom Feet, her guildmark was on her right shoulder. Blize's second form is really her true form. She wears the same clothes as in the normal form, but the most spectacular thing about her appearance is a pair of angel-wings allowing her to fly and fight. The first wing is green and it allows her to use Plant Magic. The second one is blue and she's able to use Ice-Make thanks to it. Her wings are enchanted and there are two different souls in them. Blize has also got a big, black tail with a golden ribbon. After she lost her Transformation ability along with Ice-Make and Plant Magic, she joined Training Branch N-3. She started to wear less feminine clothes. She's seen to wear a white, "fluffy" T-shirt with a blue cravat. She has got a yellow ribbon.Blize has short, blue trousers with a simple, brown-yellow belt. Despite that she lost her transformation ability, she still has got her tail, which is often a surprise for people. Also Blize walks in almost the same boots as before.

Transformation : Blize has two big wings allowing her to use Ice-Make and Plant Magic. Thanks to them she's able to fly very high. Even when she's not using her wings, her strength and speed is terribly high. Blize's wings are her parents' magic link. The wings defend her, but actuallly there are two different souls in them. The green soul is agressive, unkind and rude, but the blue ghost is calm and careful.Transformation allows its Caster to change his or her appearance. While this Magic is a deep and complex art, basic Transformation Magic is relatively easy for Mages to learn. High-level Mages, such as Mirajane, are capable of performing this Magic easily in all of its levels. People from Edolas can also use Complete Transformation box that contains Transformation Magic. She lost the Transformation power-and Plant Magic with Ice Magic at the age of 21, after jumping to Westa Fire (she wanted to save Fuke Morrey)

Ice-Make: Blize is able to create lots of shapes thanks to her blue wing. She can create geysers, shields, swords and various weapons like hammers or clubs. Blize can also create a big blizzard that is very useful, because it freezes everything it touches and it's a great place to hide. Blize's mother showed she could create animals made of snow or ice and she once fought with Gray during the Magic Ball. Blize's ice is blue, just like Gray's, but her magic isn't big enough to create very big objects like an ice-house or a floor. When Blize fought against Lyon, he said she has to train very long to face him again.

Plant Magic: Blize can summon lots of plants appearing in lots of shapes, for example a hammer, a fist, a pillow or a flytrap. Her green wing allows her to create vines catching the opponent. Blize was shocked when her flytrap was destroyed quickly by Lyon Vastia, so she started to train harder than before. Despite that she's a very strong person, she created a spell allowing her to merge with plants. She used it for the first time when she fought with Lyon and panicked.

Rupture Internal Organs Operation: This Caster-Type Magic allows Blize to produce strange-looking ghost out of her eyes. The apparition can freely travel in Blize's target's body and then attack his/her internal organs. The target feels strange, he/she is much weaker, but the apparition isn't able to kill Blize's target. The ghost can talk, so Blize loves it, because of his specific sense of humour. We could argue about the real source of this magic, because it partially looks like Familiar Spirit Magic. The only difference between them is that the apparition can't merge with Blize's body and make her stronger.

Master Hand-to-hand combatant: Blize is a great martial fighter. She knows many kinds of hits, throws and defences. She was surprised when Lyon said that she's a better fighter without magic.

Knowledge about ancient languages: Blize knows many languages and it's very helpful especially when there are some ancient buildings or boards consisting important informations.

When she was a little girl, Blize's parents were worried about here, because her magic power was very low. The y were also worried, because they knew she would have problems during her lifetime, so they decided to seal their magic in Blize's body. They put Blize on an altar and used the Lost Spell: Calamity Magic Seal. Her father gave her his green, plant magic and her mother gave her blue, ice magic. During the sealing their energy started to vibrate. The power cumulated in Blize's body so much, that it transformed into feathers- and after that Blize got her wings. The spell worked, but there were two effects. The wings were filled with souls created of Blize's parents personalities. The green soul is rude, unkind and frightening, but the second one is calm and careful. The second effect dealt with Blize's parents. Unfortunately they lost their powers and died quickly, looking at their daughter and kissing her. They disappeared in the magic mist.

When Blize was a little girl, she was taught by the Phantom Feet master how to control her powers. Soon she learnt how to use Ice-Make and Plant Magic. She joined the guild and started to work as a Dark-Mage... 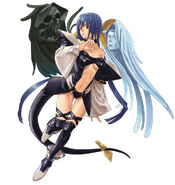 Blize in her casual form 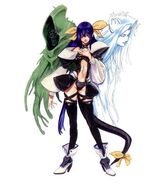 Blize as a child
Add a photo to this gallery
Retrieved from "https://fairytailfanon.fandom.com/wiki/Blize?oldid=192946"
Community content is available under CC-BY-SA unless otherwise noted.