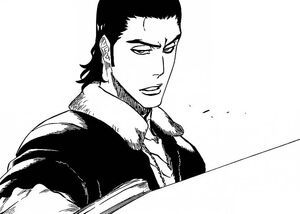 Sirius the Canis Major is a Celestial Spirit, one of the strongest Silver Keys. He fights with various magic, his main style using the Susanoo Magic Seals and Amaterasu Magic Seals. His key is owned by Ahatake Kurosaki.

Sirius has brown eyes and long dark hair that he keeps combed back, down to the nape of his neck. He is tall and wears dark trousers and a light T-shirt, over which he wears a dark jacket that has a fur-covered collar. He also wears a thin chain necklace that has an X-shaped pendant attached to it.

Sirius is generally seen as having a detached and "cool" image, but if someone picks a fight with him, he states it's in his nature to fight back. Sirius has trouble respecting others, thinking of himself on equal terms with any owner he has, something Ahatake doesn't object to, but it has made past owners (the few he has had) deem him as a rebellious spirit as they thought of him as little more than a tool to do their bidding.

In battle, Sirius never fights an enemy to the death unless the fight is personal, or Ahatake asks him to kill the individual. He does have a habit however, of taunting his opponents, and attacks without warning.

Transformation: Sirius has the ability to transform himself into the form of a giant black dog that wields a monstrous sword. The form itself is called Canis Major.

Immortality: As a Celestial Spirit, Sirius is immortal and cannot be killed unless forced to stay in the human world somehow.

Retrieved from "https://fairytailfanon.fandom.com/wiki/Canis_Major?oldid=573832"
Community content is available under CC-BY-SA unless otherwise noted.