Start a Wiki
Daiki Haruto(でいき はると  Deiki Haruto), also known as The Collector, is the masked leader of The Shadow Broker, a group of Intel hunters who wish for the all knowledge in existance. Originally he was the Leader of The Magic Intel Division, but after meeting with his mentor, the former person who donned on the persona of The Collector, he was secretly chosen to lead the group for his remaining years. Since that day, he became a more involved Leader, often checking up on the progress of his subordinates, and even overseeing the trades themselves.

When he was a teenage, Daiki often showed himself having short brown spiky hair and often wearing a brown trench coat with blue gloves and a scarf that he let drop around his neck. Later on in his 40's, Daiki is seen with blue hair due to the performance that he gave about killing himself, which led him to letting his hair grow and dyeing it blue. He has also been seen with a five o'clock shadow and a special tattoo on the back of his right hand. He still puts on a trench coat, only it is now a blue/gold coat with a hoodie that he puts on whenever he has The Collector Mask on.

Even though he was expected to act like the son of a noblemen, Daiki often put on a masquerade to please his parents, but in truth he was the kind of person who wanted to treat everyone the way they wanted to. After meeting up with Mai, he was introduced to a world beyond the rich and poor. As the years went by, he soon became more and more supportive to those that are less forturnate, and always tried to do the right thin in any event. After leaving his home, he had a more compassionate personality as he kept trying to redeem himself from living a glorious life, while others were treated unfairly. After hearing the news of his first expected child, Daiki dropped everything he ever learned about being cruel and heartless as he decided to make sure his child would be raised to accept everyone's differences and their faults, no matter who they were.

After the tramatic death of his one true love, Daiki became depressed and wallowed around in self-pity, not even caring that his only child was without a mother, and at the moment without a father. After The Collector offered him the chance to make the world different, all of his good personalities were gone forever, along with any shred of happiness that was left in him. He soon became one of The Shadow Broker's best agents, only focusing on the mission of doing what needs to be done, nothing else. After rising through the ranks, he was selected to replace his master as The Collector, and took on the cruel, focused, dictator that the collector symbolized. Despite everything that happened to him, he still showed true feelings for his son as he actually staged Hydrate invading the farm in order to give his son the chace to escape and make something of himself with the one gift he could give him.

Daiki Haruto was originally born into the noblemen family of Haruto, who were well-known for their involvement with the Government, and was the next in line to lead the family. Even though he was seen as wealthy, Daiki often spent most of his time as a child playing in the lower regions of the town, where all the commoners, told that by his Father, lived. After his teachings and lessons to prepare him for the life of a high-class noblemen as well as becoming a Mage to protect himself, he would often sneak out of his home, and go play with the other children, including a special one named Mai Moto, who he fell in love with at a very young age.

The two spent their entire childhood together, despite the fact his parents were trying to get him to meet up with potential woman to have him marry. However, at the age of 16 would be one of the most difficult times for Daiki due to his parents finding out about his trips to the lower district, and placed double the amount of guards in his home to make sure that their son could not reach it. Even with the heightened security, nothing could stop Daiki's love for Mai as he ran away from home, stealing some of his parents blood money that they recieved from Illegal trades done, and made his way to Mai's home, where they spent the entire night together. After their night, the two decided that they both needed to find some place where they could live happily and free from all the chaos in their lives.

They eventually found themselves in a far off city, a place the two could call home and restart their lives for the better. Daiki took up job listings for Mages at the local bar, while Mai got a job at a bank as the assistant manager. One year passed as they lived in peace, away from the chaos of the rich and poor, and a new suprise was in store for Daiki as Mai told him that they were going to be parents. It gave so much happiness to Daiki that he dedicated himself to making sure both Mai and his child would be taken care of.

Nine months passed as they were now anticipating the arrival of their brand-new baby, and after Mai's water broke, the two rushed to the hosptial in order to have their child. However, unknown to Daiki, his parents knew everything that was going on in his life since the day he ran away from home, and bribed the doctor an incredible amount of money to poison both Daiki and Mai only after the child's birth. They would attempt to steal the child to replace Daiki as heir to the family.

After twelve hours of pain, Mai had given birth to a healthy baby boy, but before she could name him the doctor injected the poision into her weakened body, killing Mai while she still held her newborn in her arms. Daiki was shocked as he beat the doctor within an inch of his life, until he revealed who was really behind it. Desperate to hide, he ran away with new born son, until they reached a forest where they made camp.

A few days passed as Daiki was drowning in self-pity and shame at everything that occured in his life, first his parents tried to control his life, then his wife was killed for his sins, and now he was left all alone with nothing but the clothes on his back and a son who was getting weaker due to prolong exposure to the elements. He thought all was lost untill a stranger appeared in front of him, offering a chance to change the chaos of the world.

Taking both Daiki and his son to an undisclosed location, it was there that the duo met the man that would change both of their lives, The Collector, who offered Daiki a job in the organization of The Shadow Broker, due to his connection with his parents and in exchange they would give his son proper medical treatement and a better home. After realizing that this moment would not come again, he accepted letting the group take custody of his son. However, it was hidden from Daiki the fact his son was dumped right outside an Illegal Plantation Farm, one that was under their control.

For the next 7 years, Daiki became of the Shadow Broker most prized agent, and was later selected to be the new Leader of the Shadow Broker's Magic Intel Division. One day, he was called to meet The Collector, face to face, something that no one in the history of the organization had ever done, or so they believed. It was at that time it was revealed to Daiki that his boss was dying of old age, and where he learned the truth behind The Shadow Broker. After being told all this, he was given the news that because of his complete loyalty and understanding of the organization, he would be chosen to take on the mantle of The Collector.

After putting on a performance, where he showed the group the body of Daiki Haruto, which was the former broker disguised, Daiki managed to cement himself as The new leader of The Shadow Broker.

Since taking command of The Shadow Broker, his Leadership has resulted in a more powerful reach on not just Fiore, but on several major regions and organizations. He is currently aware of his son, Geiger Strum, and his actions committed against illegal actions, but does nothing to interfere due to the guilt of abandoning him alone for so many years.

Primal Magic Is a very rare and old Lost Magic said to be on par with that of Dragon Slayer Magic with the ability to absorb the essence of any beast, merge it with their own body, and transforms themselves into three forms of the beasts more primitive forms. So far, Daiki has absorbed roughly around ten animal essences, each one was genetically made with an affinity for a form of magic that went well with the animal by The Research & Development Division.

Primal: Crocodile - The esscence came from a genetic salt-water crocodile that was enfused with Water Magic, giving the user a powerful Primal state along with a powerful magic to use in it.

Primal: Dragon - After discovering that overuse of Dragon Force could actually result in transformation into a dragon, The R&D Division forced one of their agents with Dragon Slayer Magic to keep using the Dragon Foce time and time again, until they were bestowed a full-grown living dragon. It has been seen that when in this form, Daiki is able to use Ice Dragon Slayer Magic.

Tattoo Magic - Is a Caster Magic that allows the use of tattoo's for different purposes, however for Daiki he only has one tattoo on his right arm that can controls the entire organization from the vaults to even some of the research equipment in the R&D Division.

Hand-to-Hand Combat Expert - After joining The Shadow Broker, he was pushed through severe training in order to raise him to his highest point. He has been seen knowing several martial arts, able to take on several different agents, and even defeated the leader of the Magic Intel Division, taking his place as the new leader.

High-Intellect - Under the tutelage of The Shadow Broker, Daiki has been known to be able to create very solid stratgies as well as make fast calculations in instances.

Leadership - Despite not having much teaching when it came to leadership, his training with The Shadow Broker eventually put in as the leader of Magic Intel Division, making it one of the most successful division in his generation, and has been shown to bring inspriation to his troops. 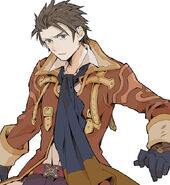 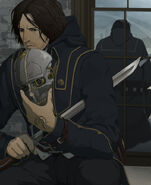 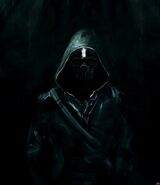 Daiki as The Collector

Daiki without Mask
Add a photo to this gallery
Retrieved from "https://fairytailfanon.fandom.com/wiki/Daiki_Haruto?oldid=143972"
Community content is available under CC-BY-SA unless otherwise noted.