Devil Synchronization is considered amongst Devil Slayers to the definitive pinnacle of Devil Slayer Magic an individual can reach within their lifespan—the "absolute zenith" (絶対天心, zettai tenshin). This ability is often equated to Dragon Force due to the similarities they supposedly possess, specifically transforming the user's physiology into a humanoid version of the creature they were designed to slay. In the case of a Devil Slayer, they are transformed into a creature known as a Cambion (, Kanbion; lit. "Humanoid Devil"), a being said to be the perfect balance between a human and demon. These entities are said to be the result of a Corrupted Human if they embraced their demonic heritage, abandoning their human visage.

Devil Sync acts as a stimulant to the body and through it flows much like adrenaline would heightening the users abilities to levels that would allow them to touch the power of Etherious in their respective styles. Devil Sync increases the damage done by standard Devil Slayer spells immensely and grants the user access to more advanced attacks. Intensifying the user's physical prowess in every category and considerably boosting their magic power, even heightening their reaction time and reflexes. When exuded at its fullest, the Magic becomes far more demonic in nature surpassing the previous limitation that would have resided on their magic prior to learning the form. This is often considered the price as for more power gained more humanity is lost.

When utilizing this form not only does their power increase dramatically but the potency of their spells does as well. Being that their focus is now using the particles their attacks become extremely lethal to mages who are not adjusted to the particles within their body. Poisoning and weakening their magic over the course of the fight. Prolonged battles versus this form can result in heavy exposure and possibly death.

The users of this ability have learned to up their power at a steady rate by using a number system to manage and moniter the level of Synchronicity to ensure they do not rely on more power than they need. This process prevents overstimulation of the magical barrier particles and lessen the amplification used to induce the Sync. While it does not stop the demonification process it does create a system and method to at least slow down the effects by not wasting or exerting more power than needed at a time. The lowest known Sync level is that of 5% which is a slight increase in the physical abilities of the user.

It's only in this form that the users of this transformation are able to use the Diabolical Extremities — the ultimate and most forbidden technique of the Devil Slayer; however, this can only be achieved when they truly mastered the power of their Devil Sync — freely being able to utilize the immense energies that the transformation provides. However, after such a technique is used the transformation dissipates automatically — putting them in a state of extreme danger, either by death due to the strain the technique puts on the body or accelerating the effects of demonification to such degrees, making it irreversible.

In order to obtain Devil Synchronization, the user must read the final chapter within the Devil Slayer Book that they are learning in known as "Shedim" (, Shedimu, Hebrew for "Demon" and Japanese for "Unleash the Inner Devil"). This chapter is only revealed to those that possess with enough Magical Power. By focusing their magic into the book, the user is able to reveal the chapter to their eyes and can read it after they have read and mastered the previous chapters that lead up to it. This chapter teaches the user about how the Magical Barrier Particles that has modified their magic and has multiplied over the years.

The user must learn to hone in on the very principle that modified their magic to be more demonic in nature. This process is done by stimulating the anti-eternano with their magic, increasing the overall output. Due to the modification that is needed to utilize this Magic, these particles are now harmless therefore causing no damage to them. Naturally most Devil Slayer's when using their Slayer Magic, rely on their magic to act as a vector that carries the particles within it and become akin to an untapped resource of power that resides within themselves. They then proceed to hone and funnel the particles in a similar method to how they would utilize their magic, taking it into their Magic Origin and spreading it throughout the body. 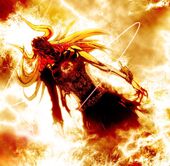 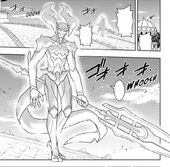 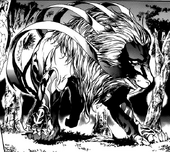 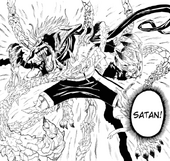 Retrieved from "https://fairytailfanon.fandom.com/wiki/Devil_Synchronization?oldid=566809"
Community content is available under CC-BY-SA unless otherwise noted.