Dorothy Matthews (ドロシーマシュス, Doroshī Mashusu) is a former Human who used to work for the Magic Council as one of their Rune Knights. In actuality, Dorothy Matthews is now currently an alias used by the Etherious known as Lullaby (呪歌, ララバイ, Rarabai), whose remains took control of the body of the Rune Knight Dorothy during the Council's attempt to reconstruct the broken remains of the Etherious and use it as a weapon of mass destruction. With its roots having taken hold in the body of a Human, Lullaby currently has fled from the Magic Council, using its new body and name as an appropriate disguise. 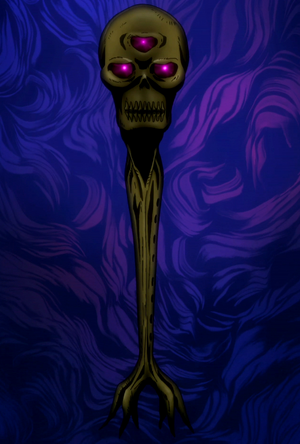 Dorothy, or more appropriately, Lullaby's human form, appears as that of a young woman with a petite, almost innocent appearance. With a lithe build, Dorothy has short blonde locks, cropped to her neck, with two long locks that frame her face hanging down. Her eyes are a dark blue. Extending from her time as a former Rune Knight, Dorothy's outfit is highly customized; she wears a dark green tunic with an armored breastplate, and additionatelly, wears two armored plates encircling her waist. She also dons an armored helmet to protect her skill and face; attached to the side of this helmet are two wings, which are magical items that enable effortless flight.

Despite her high combat capability, Lullaby, when preferring to avoid a fight, will take advantage of this body's innocent appearance to manipulate others to fight for her in situations where she'd preser not to dirty her own hands.

Retrieved from "https://fairytailfanon.fandom.com/wiki/Dorothy_Matthews?oldid=490501"
Community content is available under CC-BY-SA unless otherwise noted.