Dragon Wing is a growing yet lower ranking guild in Iceberg that has it's guildhall close to the capitol city of Permafrost (Just making this name up, no info on what the capitol is named), however despite it's small size it has some strong and loyal wizards in it.

The Dragon Wing guildhall is in an old building located on top of the mountain behind Permafrost city. 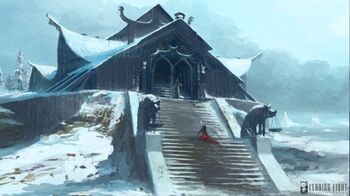 The guild has been in it's hall for about 50 years now, started by Draconus when he was younger, it has till this day always been a small but tight-nit guild. The guildhall once belonged to a warrior guild before it was abandoned.

A Day In The Life Of A Dragon Wing Member.

Retrieved from "https://fairytailfanon.fandom.com/wiki/Dragon_Wing?oldid=412245"
Community content is available under CC-BY-SA unless otherwise noted.