Start a Wiki
Eric Minthearst (エリック·ミント·ハースト Erikku Mintohāsuto) is a Take Over Mage and a S-Class Mage of Dragon Heart.

Eric is a very arrogant and hardheaded boy. He usually will completely ignore his partner Cindy Nakahara when she is telling him a plan, and then come up with his own. He always challenges everyone to a fight, and the only person he hasn't beat is Cindy. Despite being hardheaded, Eric has shown himself to be quite intelligent. His intelligence is shown when he, Cindy, and Uchiki Kietsu were lost in a magically enhanced forest, and he figured out a way to manipulate runes placed onto the forest, so they could get out. So far, this is the only sign of his intelligence.

In battle, Eric seems less brutal than his partner, but truly is not. It is actually possible for Eric to be more brutal and merciless to his opponents, as shown when he repeatedly slashed Uchiki with his cursed sword Ango.

When he isn't battling, or on a job, he usually is seen at the guild bar challenging anyone to a drinking contest. Something which his partner despises, as she is usually the one to drag him home when he's drunk. He is lighthearted, and always looks forward to messing up, pranking, or destroying Cindy's house, although he rarely comes back without a injury.

Eric has messy, spiky blonde hair, and blue eyes. He is of average height, and has a slight build. He is usually seen with a black jacket with white trim. He usually has a white or black t-shirt on, with black fingerless gloves. His sword Ango is either strapped onto his waist, or across his back. He wears dark green baggy pants, and black sneakers.

Eric lived in a wealthy family, and had everything he wanted. When he was six, he was sent to the same school Cindy Nakahara would later join. At the academy, Eric was taught Take Over and Ice-Make. He excelled at both academic and magic schooling, and was extremely popular at the school. When he was ten, he was summoned back home. As a farewell gift, his swordsmanship instructor gave him one of the two cursed swords, Ango, his partner has the second sword, Deleritas. He was told to never unsheathe it until absolutely necessary.

During the trip home, he was ambushed by bandits. Using his new Take Over: Dark Soul, he defeated half of the bandits, and then ran out of magic power. The remaining bandits overpowered him, and seemingly defeated him. He then unsheathed Ango, and tapped the foot of one of the bandits. A black, snake-like shadow writhed along his body, causing him to scream in pain, and then causing him to collapse. Eric defeated the rest of the bandits this way.

Eric later found out his father had planned the attack because he didn't want a 'weak' son. In reality, Eric already had his Second Origin unlocked, had two Take Over souls, and was efficient in using swords. Eric later stumbled into the guild Dragon Heart and was treated by the guild master. The guild master welcomed him into the guild, and then started to train him. He was taught to fight with a sheathed sword, and gained another Dark Soul.

He soon started to take small jobs, training hard to prove that he isn't the 'weak' son.

After ten years, he went back to his old home, only to find out it had been burned down, killing both his parents. When he returned back to the guild, there was a new member, Cindy Nakahara. He noticed that she was carrying Deleritas, the twin of Ango.

After being promoted to S-Class after Cindy, he formed a team with her, and rivaled Uchiki Kietsu's team with Robert Monar, despite Cindy being the guild ace.

The two become the bestest of friends, and are inseparable.

Take Over: Dark Soul: Eric's version of Take Over is Dark Soul. This allows him to incorporate the power of demons, powerful monsters, and dark beings. His spells greatly enhance his speed, strength, and magic power.

Dark Soul: Water Demon Eric's hair turns a dark black with white highlights. He gains black angel wings which grant him the ability to fly. He wears a black cloak, and metal chains. His eyes start to glow a much brighter blue. He gains the ability to use Water Spells incorporated with Darkness Magic. He is granted the use of Water Demon Magic. 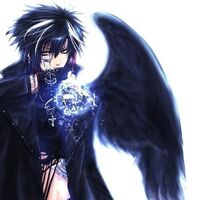 Water Bubbles: The user creates bubbles of water with oxygen trapped inside that allows those who put their heads in the bubbles to breathe underwater.

Water Dome (ウォータードーム Wōtā Dōmu): User creates a dome of water around themselves, also making them blend in with the ocean around them.

Water Jigsaw (ウォータージグソー 水流激鋸 Wōtā Jigusō): User transforms part of their body into a swirling mass of water slicers that can slice his/her opponents like a saw.

Water Lock (ウォーターロック 水流拘束 Wōtā Rokku): User creates a large ball of water that can be used to attack and trap their opponent, because the spell is made out of water, it can be reformed if broken.

Water Slicer (ウォータースライサー 水流斬破 Wōtā Suraisā): Blades of water come out of the user's body and slashes their opponent. This technique is known to be able to slice through solid rock.

Water Rush: User rushes past the target, attacking him or her with a high-speed gush of water . Whirlpool: User swipes his/her hand forward, creating a spear of water that turns into a whirlpool when the hand is fully brought forward like a punch. The whirlpool surrounds the target and then blows it away.

Dark Soul:Fire Demon Eric's hair turns a bright crimson, and his left arm turns into a black angel-like wing. His right arms is engulfed in flames, and has the form of a claw. He is able to fly for short distances. Unlike regular fire magic, when Eric employs his Dark Soul:Fire Demon, his fire can be smothered easier by Water type Slayer Magic, but it can be smothered by regular water magic, but it is very difficult. 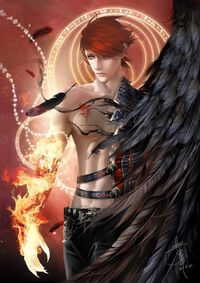 Demon Phoenix ( 鬼フェニックス Oni Fenikkusu) Eric extends his right hand, and sprints towards his target, leaving a trail of white hot fire. Then he slams it down onto the ground, creating several large explosions around his target.

Fire Bullets (火災の箇条書き Kasai no kajō kaki) Eric presses his hand and wing together, and thrusts them forward. Hundreds of white hot fire bullets follow the target until they hit them, or if Eric runs out of magic power.

Dark Soul Eric's most powerful Dark Soul. Though in comparison to his other two Dark Souls, this one looks weaker, yet it boosts Eric's speed, strength, durability, and grants him the use of Darkness Magic. It grants him the ability to cast Urano Metria, and Eye Magic. His hair turns jet black, and one eye glows a bright red, while the other glows bright cyan. He wears a dark grey cloak, and black magic power is emitted from him. His lower face is covered by a metal gas mask, rendering him immune to poisonous gases. His two hands are bandaged. 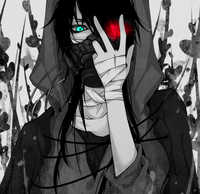 Genesis Zero (ジェネシス・ゼロ Jeneshisu Zero): One of Eric's strongest spell. He first gathers a large amount of Darkness Magic around his fingertips before, ultimately, unleashing it as a wave of countless phantoms that seek to erase the target's soul, and even their very existence.

Dark Gravity (ダークグラビティ Dākugurabiti): As its name implies, it amplifies the gravity in a certain area.

Dark Rondo (常闇回旋曲, ダークロンド, Dāku Rondo): When cast, Dark Magic with horror-stricken faces swirls around Eric's hands, becoming more and more condensed. Eric can then fire the gathered Magic as widespread attack,or as a condensed one.

Enhanced Strength Eric displayed tremendous strength when fighting against Cindy, being almost on par with the guild ace.

"I can destroy your entire existence in just a second. I don't care about your stupid, 'sad' stories. I just know that you've hurt my guild, and my pride far too much. I think it's about time you just....vanished."

Retrieved from "https://fairytailfanon.fandom.com/wiki/Eric_Minthearst?oldid=189671"
Community content is available under CC-BY-SA unless otherwise noted.