Fairy Tail: Dusk (name tentative) is an upcoming fanon instalment of the Fairy Tail series. co-authored by User:Perchan and User:LastationLover5000, the series is set for debut anytime within 2013-2018, however, like the name, a true release date has not yet been decided. It will be their second project after Fairy Tail: Dawn. Very few details are known about the series so far is it will be set in a school.

Dusk will indeed be a sequel to it's predecessor, set a decent two centuries into the future, which only gives the creators, who prefer to distance themselves from canon as much as possible, more creative room. As mentioned prior, it will take place in a currently unnamed magical school, and the main characters will primarily be students. According to Darkrai, the current idea is to write the series in seven "parts", referred to as "years", or, alternatively, "books", as the school operates on a seven year enrollment system, and each of these years will have a currently undetermined number of chapters and arcs that will vary in length between each year as the story progresses and the characters grow. As such, Dusk is expected to run much longer than Dawn, and perhaps have even more characters, with the length of the intended story allowing them a better chance at screentime.

Recently confirmed is that Dusk, due to taking place two centuries into the future, will be taking the Fairy Tail universe into that future with as much enthusiasm as possible; introducing a technology boom influenced by human effort and the combination of magic with machinery. Darkrai stated the goal is to create a new universe that, while it still holds the feel of Fairy Tail at its core, will be an entirely new experience for readers to enjoy.

Due to Dusk being a series that was announced well before even most of the planning stages were underway, Darkrai and Per often release "pre-release" information, usually in the form of new character designs and names (while spoiling none of the character roles aside from Kratos and Eris, who are confirmed to be the main protagonists), as well as the basic premise of the story. As long as Dawn continues, ideas for Dusk will flourish and some may be revealed to the general wiki through this page.

Fittingly, due to being set two centuries into the future, Dusk is going to feature massive technological advances through the Magitek of Giselle Mercury; one of the confirmed advantages slated to appear is called the Cosmic Road, though Darkrai states this is only one of many. 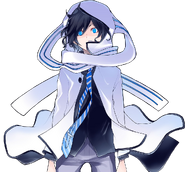 Retrieved from "https://fairytailfanon.fandom.com/wiki/Fairy_Tail:_Dusk?oldid=366673"
Community content is available under CC-BY-SA unless otherwise noted.