"Prepare yourself, the Fire Demon is back..."

Awakened (ねざめ, Nezame) is the Second Origin Activation of Fang. 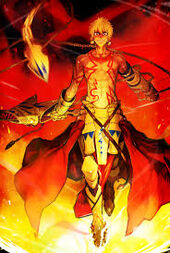 Fang’s current Awakened Form is vastly different from his past self’s. Unlike the Arabian themed clothing like his old Awakened, Fang’s present one is more like his armor suits. His physical body features doesn’t change, with an exception of the strange red markings all over his body. The tattoos are in fact the “timer” of the Awakened Form. When first transforming, all of the markings are present. However, as time passes, the markings slowly fade away one by one. Once all of the tattoos are gone, Fang can no longer sustain Awakened Mode any longer and thus, transforms back.

Other than the red markings, everything else about Fang stays the same. His attire during this transformation is the same exact armor suit from when he was 21 years old, with an exception of the armor plates that cover his back and chest.

Going back 9 years, Fang's old Awakened form is vastly different from his current one. Just like his old Arabian garb, this Awakened form is also Arabian-like. In this form, Fang is much more muscular than before, gaining much more strength, speed, and reflexes. His clothing is a white robe that hangs form his shoulder and covers his waist and thighs, and a red robe held with a belt. Fang's Fire Magic spell Fire Berserker is equiped on his arms, but the gaurents are bigger, reaching all the way up to his biceps. Fire Berserker is also less armor looking, instead people would describe it as more monster. He has the same monster looking Fire Berserker on his legs. There is a "third eye" placed on his forehead that Fang said it actually doesn't do anything. He wears several golden accessories.

Despite being in this mode, Fang's acrophobia has not been changed. He will still shiver at the sight below him. Most times, after seeing the scenery below, his Awakened Mode goes out rapidly. This mode doesn't change his durability and endurance levels, so Fang still has the same amount of stamina. This mode doesn't last that long either. Only about five minutes maximum.

Retrieved from "https://fairytailfanon.fandom.com/wiki/Fang/Awakened?oldid=458286"
Community content is available under CC-BY-SA unless otherwise noted.