Giants (ジャイアンツ, Jaiantsu) are a mysterious race of humanoid creatures varying in size and appearances located in various areas within Earth Land, though most commonly in Gratis. Though they have been found all around Earth Land, there exact origins are unknown. They have also been referred to as Titans (タイタンズ, Taitanzu), mostly by people of smaller civilisations, superstitious individuals and most of the population of Gratis.

Giants are a largely differentiating specie with there being many different types within the race. Giants greatly resemble human beings. They are bipedal creatures with the same number and arrangement of limbs and features one would expect in a human being. Some giants are deformed whilst some simply appear as enlarged humans. The degree to which a giant can be deformed range from minor abnormalities in proportions (enlarged head, small limbs, etc.) to apparently lacking skin and subcutaneous tissues and some giants don't even seem to posses the ability to bleed. Other deformities include; largely widened mouths, significantly more teeth than a human - some giants have an enormous number of small, square teeth, some have been known to possess only canines. Though quite rare, some giants have an entirely unique appearance, this is the case for giants such as Brutus and Noah.

The size a giant can reach is currently unknown but the largest encountered, Noah is approximately around 40 meters tall, the smallest being a meagre 4 meters tall.

Like with their physical appearance, Giants do not posses a set behavioural pattern and are largely unpredictable. Some giants simply posses no form of intelligence at all and are simply mindless beasts, easy to trick, distract, or deceive. Whereas some giants posses astounding amounts of intelligence and are capable of being as mentally stimulated as human beings and on occasion even more so. Several giants have also displayed the ability to communicate with humans, again varying in degree; some only being able to form small words and mummer as where some can fluently communicate with humans and some can even communicate with animals. They are capable of being unaggressive and very neutral creatures but thus far this has been quite a rarity. They seem to largely have no ill-will toward any other life form save for human beings as seen when a giant allowed several small birds to land on its shoulder. This is not a universal trait as a large giant (10+ meters tall) has been seen attempting to devour a deer. Some giants have been shown to be completely sub-servant and obedient almost to the point of just being a very large pet.

However, although many Giants have shown no visible or audible form of communication (other than gasps, roars and other abnormal sounds), they are apparently very aware (some more so than others) of - and able to deduce hostile intent from other sentient beings such as other giants. Some giants have been found to be incapable of utilising one or more of the senses such as sight, this may be simply just another deformity within different giant classes but this cannot be known for sure.

Classifications within the Specie

A Giants physiology is very mysterious and as stated before they are very unpredictable due to the specie being so vast.

Though Giants have yet to display any actual forms of magic (thus far) they are capable of great physical feats - varying from giant to giant. Individual giants posses varying levels of physical ability; stamina, speed, strength, etc. There source of power is once more largely unknown, however several giants have been noted to become more docile and less physically able during the night and some even become fully dormant during the night - this indicates that giants (or at least some different types) draw their energy from the sun and rely primarily on solar energy. 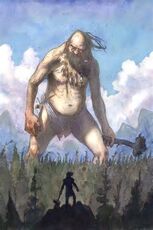 An abnormally large large giant with no visible mutilations. Known as Noah. It is also carrying a large club and wearing a loin cloth. Facial hair is clearly visible. 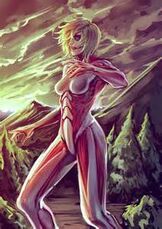 A giant, resembling a female. It is lacking skin tissue in certain area, exposing much muscle. 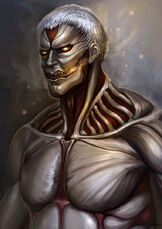 A giant covered in steel-like armor. Named Brutus.
Add a photo to this gallery

Retrieved from "https://fairytailfanon.fandom.com/wiki/Giants_(race)?oldid=551609"
Community content is available under CC-BY-SA unless otherwise noted.