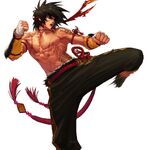 Hand-to-Hand Combat: Gore is very knowledgeable in the many styles of Martial Arts, though his main ones being those that use his feet and grapples efficiently. He has trained to the point of being able to throw lightning fast kicks with immense power behind them, even capable of breaking down steel doors. While he can use a flurry of fast kicks to overwhelm his enemies, He also has his incredible reflexes that allow him to act at a moments notice, which enable him to counter many blows. This especially true when using his grappling capabilities, which are efficient enough to stop a blow before the opponent can gain any momentum. What is even more impressive, is the fact that Gore can hold onto a person to strongly that it leaves bruising or worse, break bones. He of course has trained in order to combine all his different fighting styles into one, meshing them effectively to deliver the best results. Gore has taken to heart the saying that ones body is their true weapon, as he is able to use every part of his body to deliver devastating blows. Which is further helped by his ability to read his opponents movements through the most of subtle inclinations. Like muscle movement or body language.

Immense Speed: Gore can dash about a place in quick red blurs. As his opponents will usually only catch a glimpse of his many red bandannas on his person, before it is too late. He moves so fast he tends to disappear from sight rather quickly, which allows him to effectively get close and engage in close quarter combat. Though his dashing speed is not the only weapon in his disposal as he can send lightning fast punches and kicks, that some mages are not even able to follow. Not only are they incredibly fast, but they have immense accuracy which allow Gore to deliver deadly blows with each kick or punch. While he has immense speed in the ground, his speed in the air might be a little more impressive, as he uses his own flames to move about and traverse the skies. He can use short but constant burst of fire that allow movements mid-flight or even mid combo. These short burst giving him the means to dodge attacks at close range, even only few inches away, though it does depend largely on the type of attacks or spell.

Inhuman Reflexes and Perception: Gore has the ability to act in a split second. Which give him the ability to counter or dodge attacks, that normally would be impossible. This is especially useful in close quarter combat, which allow him to grab onto his opponents to toss or initiate his combos. Getting in between the flurry of attacks from his foes to land his own attacks or simply dodging high-speed attacks at close range. He is further helped by his heightened perception that allows him to perceive attacks that seem to move in a slower rate of motion, almost as if time is moving slowly., though in reality they move at a regular pace. This not only allowing him to dodge in time, but it give him the ability to act accordingly, predicting trajectory and gaining the upper hand.

Immense Magical Power and Retainer: Gore is more of a physical fighter, though it is not to be confused with lack of Magic. He has immense Magical power capable of debilitating damage. His spells capable of overpowering most of his enemies with sheer force. Though most of his fire based spells can also absorb other spells effectively stopping them or at the very least diverting them. His prowess is further shown when he allows his magic to leak out in large amounts, known as Magical Aura. Which coincidentally causes an immense heat to overtake an area. While using large spells continuously can be ill advised, Gore has the Magic capacity to unleash an onslaught of his spells with no worries of draining his magic completely. He is able to unleash his spells continuously and effectively for a long period of time which does grant him an advantage over some of his foes.

Fire God Slayer Magic is a Lost, Caster and form of Slayer Magic, That allows Gore great control over the element of fire. As he is able to create and manipulate flames in various ways. Even using the ambient Eternano to do so. God Slayer's are said to be a cut above Dragon Slayers, capable of releasing dangerous types of flames and heat, which is why Dragon Slayers are in fact unable to absorb these flames, unless emptying their magical retainer completely beforehand. While this can be taken to mean that God Slayer spells can overpower Dragon Slayers, that is not the case all the time. As it largely depends on the magical power of the user and the enemy. Though it can be safe to say that in Gore's case, he usually does end up overpowering his foes. While this type of magic can be learned from Gods themselves, Gore was implanted with a God Slayer Lacrima that enabled him the ability to perform this type of magic. As for it's physiology or substance of this type of magic, Gore has a wide variety. Being able to form his spells in solid form which is great for causing Bludgeoning damage or creating such things as shields and weapons that will burn his targets greatly, even to the point of scarring immediately. It can also take on the form of streams or beams depending on Gore's usage as well. Though that is not near the limit of his flames, as they can also take on a gas form, capable of creating mists, fogs and the like. It can even take on the form of liquid as can be seen by his deadly spell that creates rain made of heat, which has the effect similar to acid rain. This type of magic grants the user something very close to the power of gods,which coincidentally also change the physiology of the user, in this case Gore, in order to withstand such large amounts of power. Enabling their bodies to gain an immunity to his flames as well as the flames of others even Dragon Slayers, though the exception being other God Slayers or Devil Slayers. Though it does grant him a large resistance towards them. The power bestowed upon users of this magic also grant Pyrokinetic capabilities that allow Gore control over the flames of others, which can be used to divert them or even send them back. While Gore can do this with pure mental ability, pointing at his intended target and using physical gestures increase his control as it would increase his concentration greatly. While this type of magic is extremely strong on its own. It can also absorb other flames even those of the slayer variety, to increase it's power further. This of course also allows Gore to absorb flames for the purpose of regaining his stamina and healing most wounds. Though he is not capable of absorbing his own flames for the same affects. One thing to note about the flames of God Slayers, is the fact they are black, giving them a bit more menacing look. Gore is capable of changing his body to that of his flames, that help against physical and some magical attacks. As they tend to simply pierce through the flames, only for the flames to regenerate and instant later. Sometime even melting weapons when exposed to these flames. These flames cannot be easily put out, even when facing Ice, Wind or Water magic. Unless of the slayer kind, but even then it is a tasking job.

Gore is also given great control over the element of heat, shaping it into a physical state for many uses. Even creating complex items such as chains. He can do this by condensing the heat that always surrounds his body or even use the pre-existing heat within an area. Specially to be true when in a heated battle. As most of his spells will create an unrelenting heat after a while. While he cannot absorb the heat to have the same affects of absorbing flames. He can still gather the heat rapidly to create his flame based spells, with heat. Though they are not nearly as destructive as his fire based spells.

Retrieved from "https://fairytailfanon.fandom.com/wiki/Gore?oldid=525394"
Community content is available under CC-BY-SA unless otherwise noted.