Halfrida Sommer (ハルフリダ ソマー, Somā Harufurida) is a member of the Northern Light guild. Serving as its strongest non S-Class Mage, she has earned the epithet Peacekeeper (平和守り, Heiwamori) for her efforts in maintaining the peace between the unruly members of her beloved guild, serving as the cool head in tense situations. Because of this, Halfrida is relied upon by Julianna as a warden of sorts, due to the guildmaster's laxness. Often exasperating Halfrida as she believes the GM should lead by example. Regardless, she is respected by all mages within Northern Light as a level-headed figure responsible for guiding the next generation. 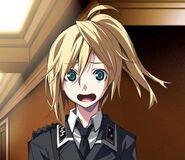 Lightning Magic (雷系各種魔法, Kaminari Kei Kakushu Mahō): This serves as the primary means of Halfrida's combative capabilities. Serving as her most effective fighting style in battle...

Retrieved from "https://fairytailfanon.fandom.com/wiki/Halfrida_Sommer?oldid=616942"
Community content is available under CC-BY-SA unless otherwise noted.