Start a Wiki
Haruhi (ハルヒ) is another one of Jin Lowell's dolls and an extremely reliable one that has fought along side Jin for quite a long time. Specially during Jin's days as a mercenary. Haruhi was also there when Jin faced off against King the first time.

Haruhi was the second Doll Jin ever created and the one she uses most when she has to do reconnaissance missions. Haruhi was actually present the time King decimated a small town and all of Jin's guild friends.

Strength: Haruhi possess enough strength to fend of her foes and fight on par with many great wizards. She is strong enough to lift objects a couple times her size 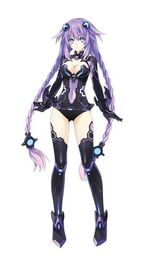 Possession: Is an armor given to Haruhi by Jin. This armor is actually quite unique as it can be used by Haruhi without using her magic. This is do to the fact that the whole armor is powered by four small orbs that are constantly absorbing Eternano. Two of the orbs are located on her head and one at the end of each of her long braids. The absorption of Eternano is almost invisible and can't be noticed except by experienced wizards and it does not cause any harm to anyone in the vicinity. These orbs have special circles inscribed in them that let the user summon the armor by simply calling out the armors name or making the armor disappear by saying the armors name and then release. Should the orbs be destroyed during battle, then the suit is rendered useless and become immobile. Although the orbs can regenerate. It takes about a day for them to be back into working order. The orbs are quite durable and have a small shield protecting them at all times. The user cannot make the orbs absorb Eternano at a faster pace so it takes the armor about five minutes to get to it's full potential. The armor itself is capable of summoning its three weapons by the same way the armor was summoned.

Enhanced Speed: This armor gives Haruhi an outstanding boost in speed being able to dart around faster than the eye can keep up. Disappearing in a blink of an eye and appearing somewhere else in a split second. This is possible thanks to the Eternano running through the armor at a constant rate giving out short bursts of Eternano through the bottom of her feet and four small indents on the back that seem to work like thrusters.

Enhanced Durability: This armor gives Haruhi an incredible increase to her defenses being able to withstand numerous attacks and block them successfully without receiving much damage. The armor is made up of special alloys that are practically weightless, but incredibly strong and even being highly resistant to a few elements such as fire and ice.

Rayos: This sword is infused with lightning magic allowing Haruhi for numerous lightning spells. This sword gives off a constant discharge and the blade itself is made up of concentrated lightning. The blade can actually retract into the hilt at anytime the user wishes.

Relampago: This is Haruhi's Lighting katana that is infused with Lightning Magic.

Retrieved from "https://fairytailfanon.fandom.com/wiki/Haruhi?oldid=346908"
Community content is available under CC-BY-SA unless otherwise noted.