Start a Wiki
THIS WHOLE DAMNED ARTICLE IS A WORK IN PROGRESS, BEAR WITH ME, EH? (BEAR HAHAHAHA)   Ishikawa Haruhiro (石川Haruhiro, Ishikawa Haruhiro), also known as Ishi-Chan by friends and family, is the master of the Guild Ascending Wyvern, and is highly respected in Dragon Sword Island. Ishikawa is a God Slayer, known as the most powerful God Slayer Magic weilder in the Crescent Archipelago. To people who are not friends, and family, they refer to Ishikawa as 'The Fastest Man Alive, 'The Giant, or The Unrelenting Giant of Dragon Sword Island. He is called this because of his tallness, broadness, and pure terrifying speed during battle. People say that he is not human, due to his overwhealming destructive power, speed, agility, and focus during battle.

Ishikawa usually does not wear a shirt, due to the fact that his broadness does not let any shirt upon his body not rip... But, he has a tight, tone body, that symbolizes he trains everyday. His blonde hair is combed to the side, but parts kind of messy, his blonde moustache (A bold fashion choice), in a princely style. (W.I.P)

Ishikawa has a booming voice, that sounds of a Giant, or Titan himself, he is usually extremely perceptive, examining everyone from the first glance, he is always wanting to know what's going on in the surrondings around himself, therefore, he is nosy. He is also extremely prideful, letting no one step over him. He would also risk his life for other people, because he thinks that no life is worth being ended.

Ishikawa was a boy, when he first joined Ascending Wyvern, he looked up to the people who were in this Guild, because of the power that they poscessed. Shortly after, he went on a job, by himself (Bad choice), and got captured, he was in prison for over a year, before discovering a Tome that was hidden in the prison, he read that Tome, therefore, learning Solar God Slayer Magic. Then he busted out of prison. (W.I.P) 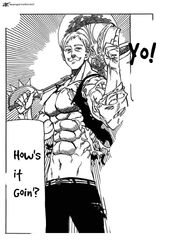 Close up on his face, and battleaxe. 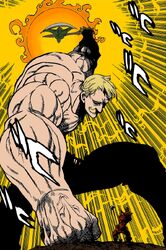 What it feels like to be put up against his Magical Aura.

Ishikawa, back in the day.
Add a photo to this gallery

Retrieved from "https://fairytailfanon.fandom.com/wiki/Ishikawa_Haruhiro?oldid=442191"
Community content is available under CC-BY-SA unless otherwise noted.