"Oh? Seems like you're stressed? Rather go home, have a shower and fight me when you're prepared. I've got a lot of time. So now, if you're ready, stand in front of me. Let's say, about four metres, kneel and allow me to defeat you!" 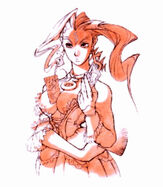 Iskiralla is a very mature and feminine woman, who doesn't like little children, who run and shout that they want to play ball games or eat ice cream or crisps. She hates them, like noisy people. Her biggest dream is to wake up one day and hear nothing except birds' singing and soft wind, which calmly whistles and makes her mind relax. But it's just illusion, because it's impossible to be calm and easygoing when a group of drunkards sing and argue near her house. That's why she usually starts each day with arguing with them. She's a very pretty person, that's why lots of handsome men want to marry her or just fall in love with Iskiralla, although she's a member of the Zentopia Church army and she cannot get engaged. Moreover she doesn't like very handsome guys, because they're often too selfish and big-headed. When they meet D'arc, they left her after the conversation with strange feeling painted on their faces. Iskiralla is a very wise person, she knows many things, especially how to talk to annoying people. Her answers are very surpirsing and clever, that's why her "harem" lefts her quickly. She says that only a scientist can figure out what she talks about and she'd like to marry a professor, not an extremely cute and good-looking mage. The mage loves having a bath. She does it more than five times a day, people say. And it's true. She has also got a habit of insulting her foes in a very feminine way. Feminine and elegant.

Retrieved from "https://fairytailfanon.fandom.com/wiki/Iskiralla_D%27arc?oldid=225160"
Community content is available under CC-BY-SA unless otherwise noted.