Izrail Paku is male Iharisir , a dark mage and one of the S-Class mages of Qareen Side Guild as well as heir to the Paku Family .

Since Izrail is an Iharisir ,his apperance changes.At first he has blue eyes and bluish-black hair.After the timeskip his hair becomes only blue.Izrail always wears a black eye patch over his right eye and is shorter than most of the characters.

Izrail is a very strict and proud character,acting very mature and serious for his age.He rarely shows his emotions,hiding his emotions and his smile to everyone.Izrail is usually joked about by many of the other mages,because of this he has developed a cold and hostile attitude toward most people.

Izrail takes pride in having the rank of an S-Class Mage and can't tolerate people viewing him as a child.Izrail is shown to be easily annoyed by others goofing off or drawing unneeded attention to themselves.He is also competitive and will not give up easily without winning.

He has a cold outlook on life and an insecure and dark side,he believes the world is made of lies/illusions and that no one would ever accept him,calling himself "A cold hear-ted,sad excuse for a living being who will never be loved or accepted by anyone."The deaths of Izrail's loved one affected him in his childhood, leading him to become what he is today.

Although Izrail is cold hearted and hostile,he is actually very kind and caring just like his child self.Such as tolerating his fiancée Annabelle Griffin 's childlike personality and disowning his cousins Cedric Sakamoto and C.D. Sakamoto from the Paku Family so that they didn't have to bear their family's curse.

Izrail Paku was born to the noble Paku Family on December 3.Even before Izrail was born,his father Edward Paku arranged an engagement with the daughter of The Griffin Family Annabelle Griffin .Since Izrail's father was the head of the family,he often brought Izrail with him to met other noble families.When Izrail was still young the heirs of the Morita Family and Orikasa Family came to the Paku Manor to met with Izrail's father.The other 2 family heirs brought their children with them, Ciel Morita and Izumi Orikasa .Ciel at that time wanted to make more friends with Izumi so he became friendly with Izrail .Soon the 3 of them became close to the point Izrail thought of Ciel was his other father and Izumi was his other mother ,they often played with each other.

At one point of Izrail's life a group of people were hunting and killing noble families.During the hunt Izrail's parents were killed,so were the rest of Paku Family leaving Izrail to be the only last,living blood related member of the Paku Family.At the same time both Morita and Orikasa family went bankrupt. At his parents' funeral Izrail's uncle and aunt said they'll take care of him but he refused.Since Ciel and Izumi's family went bankrupt,he decided he'll take them in as his butler and maid and they'll take care of him as parents.Ever since that day Izrail became the head of Paku Family,living with Ciel and Izumi under their care.

The main reason for the death of the Paku Family is because of a curse.The Paku Family were originally a family of assassins,murdering the people of Armaan Griffin and Nigel Griffin 's race.Each heir had to bare the curse their before death for atoning their sins of murdering.In the end Edward was murdered along with Izrail's Mother but Izrail sacrificed himself and decided to take in half of the curse.

Right after his parents were murdered and the group of people hunted/killed his family,Izrail was brought to an unknown place which (In Izrail's memory) was known as "Heaven." The people there abused Izrail both mentally and physically.From time to time,they wanted him to "Shine" like a "Star." In order for that to happen,they lock him up in a cage and only allowed him to memorize a "Song" and practice the "Song" daily.After locked up in a cage for so long with no rest or food and to only memorize and practice,as well as the child abuse,Izrail became insane.Somehow Izrail was summon a katana and cut the cage.Afterwards Izrail started killing the people at "Heaven" and escaped ,going back home.

After a few weeks of Izrail coming home and he was able to see Anna (Annabelle Griffin) again.But to his horror Anna was in a comma due to her illness Patrocanluna .When she woke up she got amnesia and couldn't remember anything.Since the day Anna awoken from her comma Izrail was determined and did whatever he could to bring back Anna's memories as well as her old self.During this time Izrail had therapy sessions with therapist who brought his daughter to all of Izrail's sessions. After Izrail's 13 session Momoka Mignogna (His therapist's daughter) approached Izrail and befriended him.They had a very close sibling-like relationship but when Momoka passed away Izrail went into a greater depression.

Izrail's cousins Cedric Sakamoto and C.D. Sakamoto lost their mother after she gave birth to C.D..After the years of Cedric and C.D. 's mother's death and before the Noble Family Hunt,in C.D.'s early years she was taken care of and nursed by a woman named Margaret Sakamoto since Cedric and C.D.'s father was still depressed by his wife's death as well as the fact C.D. still needed milk. Once Izrail found out about the Noble Family Hunt he made a deal with Margaret.Since Margaret could not bear children but thought of Cedric and C.D. as her own,Izrail disowned his cousins from the Paku Family and ordered Margaret to adopt them.Izrail did all of this so that Cedric and C.D. wouldn't have to bear the Paku Family curse.

Self-Destruction Spell :Izrail knows how to easily destroy objects(Both Living and non-living) and undo this spell even when it's casted by a powerful Mage.

Fire Magic:Izrail can release fire from his body and manipulate it.

Gravity Magic :A type of Magic which grants Izrail control over gravity, allowing him to manipulate it at his advantage in a number of ways. He is able to freely increase or decrease the amount of gravity in the area around him with devastating effects. By applying this gravitational power to incoming enemy attacks, Izrail is capable of rendering them harmless by dragging them down to the ground. Gravity can be used to lift objects, even gigantic ones, and people alike, and to move them around in the air; in addition, when concentrated around a single opponent, it can cause the latter great pain.

Memory Control :This Magic allows its users to add his existence to other people's memories.

Human Subordination :It allows the user to cast significant influence over humans, making it possible to make them subordinates for the user. In battle, it could be used to temporarily weaken the physical and Magical abilities of humans around him.

Expert Hand-to-Hand Combatant: In addition to having powerful kicks and punches,Izrail has also shown proficiency in counterattacks, takedowns, and body locks. He has repeatedly been able to catch an opponent's weapon strikes with a single hand.

Strength:Izrail is shown capable of breaking through solid rock with his bare hand.

Master Swordsmanship Specialist:Izrail's skills in swordsmanship are of the highest caliber. His offensive capabilities mainly come from Fencing,which he has practiced at a young age.

Betrothed since birth, Izrail and Anna are childhood friends. When Anna was a baby she was sickened with Patrocanluna and once Izrail understand what is was he promised he'll always take care of her. During the hunt of nobles they were separated and their conditions got worse. After many weeks later Izrail came home and he was able to see Anna but she in a coma.When she woke up she got amnesia and couldn't remember anything.Since the day Anna awoken from her comma Izrail was determined and did whatever he could to bring back Anna's memories as well as her old self.

Also because of her coma Anna retains childlike speech patterns and tendencies.Despite the fact Izrail can't tolerate childish things, he tolerates Anna's childlike personality and behaves like an older brother to her instead of a lover. For now Izrail and Anna have an older brother-younger sister relationship.

Izrail and Nigel aren't on good terms with each other,considering each other as rivals.They are competitive with each other and will become very prideful if one were to win in something to the point he would jeer it to the other.The reason for Nigel and Izrail's antagonism towards each other is because of an incident in their childhood.The incident involved Nigel accidentally pushing Izrail into a pile of mud while playing with him.Thinking Nigel did it on purpose an enraged Izrail kicked sand in Nigel's eyes.

Armaan and Izrail first met each other in their early years of childhood since Armaan and Nigel were Annabelle Griffin 's cousin and Izrail was Anna's fiancée.They weren't close with each other until they were older.When Anna was too sick with Patrocanluna and needed someone to fill in her place, Nuryn Kuroki was chosen.Armaan and Nigel Griffin decided to accompany and watch Nuryn in case something were to happen.

During that time Armaan and Nigel spoke with Izrail.After they knew more about each other,they competed and practiced magic as well as swordsmanship together.During most of their practices,the 3 boys share an equal amount of trust, respect, and loyalty to one another, and will often give each other a fair amount of emotional support when needed.Eventually Izrail thought of Armaan and Nigel as brothers.

Other than Annabelle Griffin Izrail had another girl who he loved as an older brother.After the Noble Family Hunt Izrail had therapy sessions with therapist who brought his daughter to all of Izrail's sessions. After Izrail's 13 session Momoka Mignogna (His therapist's daughter) approached Izrail and befriended him.They had a very close sibling-like relationship but when Momoka passed away at the age of 9, Izrail who was 11 went into a greater depression.

Ciel is Izrail's butler who is entirely devoted to serving him.Being Izrail's butler since the death of his parents, he commits fully and willingly stay by his side.Izrail trusts Ciel greatly to point he has chosen Ciel to replace himself if anything were to happen to him.In their childhood Izrail viewed Ciel as a father figure.After his parent's death Izrail chose Ciel and another childhood friend Izumi Orikasa as his guardians.

Izrail as a child from Ciel's memory 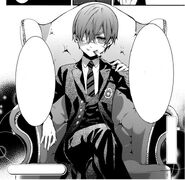 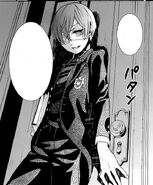 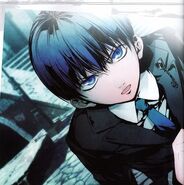 Add a photo to this gallery
Retrieved from "https://fairytailfanon.fandom.com/wiki/Izrail_Paku?oldid=123727"
Community content is available under CC-BY-SA unless otherwise noted.