"I am sorry, I cannot do this. The only obligation I have in this life is to be true to myself and right now, I am trying my best to do that. I cannot be the Messiah. I am not you Seraph, I don't want to be the hero. I just want to live my life."

Junsei (準星, Junsei; lit. "Quasar") or Junsei Hisakata (久方準星, Hisakata Junsei; lit. "Sky Quasi-stellar object") is an young orphan who originally resided in an orphanage near Fiore, until he was taken away by a mysterious man who later revealed himself to be Raiga Tsugaru and educated Junsei in the art of Magic. Currently, he is a mage hailing from the guild known as, Koma Inu. He is also the half-brother of Lyla Scott and is one of the few Mage's who are truly pacifists. Junsei is often faced with criticism and mockery due to his personality, despite this, Junsei prefers to strictly adhere to his personal rules and moral code. While not a sadist, Junsei can be quite merciless and will inflict pain to those who threaten the well being of his family; his guild. Junsei has suffered most of his childhood and teenage from dissociative identity disorder, something he recently recovered from. In his split persona (also known as Yasei), Junsei is a ruthless, psychotic, sadist who enjoys death, destruction and chaos and would obliterate humanity if not for his internal struggle or some outside intervention which forces him to revert back to his main persona. He is currently a Caster Magic teacher at K.I.M.A. At some point in her earlier mage days, he joined Dragon Gunfire but left due to being unable to fit among the members. 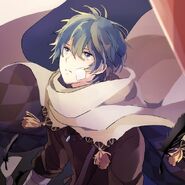 " Death is only natural, there's nothing to fear. Fear is not good for your health, Lyla. If you mourn him, you will miss him and that will lead to a rash action on your side. Acting out of anger will only cause you to walk the path our deceased friends did."
— to Lyla Scott at the funeral.

“ You're my sister Lyla, even if my father abandoned me, I will not abandon you. You are my family!”
—to Lyla.

Reflector (屈折 (リフレクター), Rifurekutā lit. Refractive): Reflector is a Caster Magic that utilizes distortion. Reflector is a form of Magic which enables its user to twist and distort almost anything. It can affect both material things, such as metal, and intangible entities, such as air and light.

"Beat me? With what? Your pathetic so called Curse? Allow me to show you what true power feels like!"

— Junsei to an Etherious before striking it with his Nova Impact

Heavenly Body Magic (天体魔法, Tentai Mahō): The Heavenly Body Magic is the main type of magic utilized by Junsei. It is a unique form of Caster Magic that allows him to utilize stellar energy as well as various astronomical objects. Heavenly Body Magic is an incredibly powerful and rare form of Magic as it requires a immense amount of control over one's magic. This is an important factor as to utilize this magic the user must be able to siphon their own magical power into the atmosphere in order to create the primary energy of Heavenly Body Magic, which is commonly known as stellar energy. In order to use this Magic, Junsei wears a special ethernano-enhanced suit, which unlike body suits is not skin tight; allowing him to move freely and is incredible elastic as well as durable. This suit has the ability to absorb vibrations and ethernano from atmosphere; the former allows him to negate or lessen powerful kinetic based attacks such as penetrating blows, strikes, magical blasts and small projectile weapons. This suit robs incoming objects of their momentum while simultaneously absorbing free ethernano in air or surroundings and balancing it with his internal ethernano in the required ratio. This unique form of energy allows Junsei to draw on the power of various astronomical objects such as meteor and constellations as well as simply generating and manipulating the energy of the stars from his body. Junsei's other personality, Yasei claims that he is a real "Master" of this form of magic.

Sleep Magic (眠りの魔法 Nemuri no Mahō): For Junsei, Sleep Magic is a Caster Magic that allows him to induce sleep on his target(s). By snapping his fingers, he can cause a single victim to immediately fall asleep but for more targets, he prefers using his Magic Flute.

Super Archive (超古文書, スーパーアーカイブ, Sūpā Ākaibu): Super Archive is a Caster Magic and a Subspecies Magic that involves the use of Magic Databases. It is the improved version of the magic used by his master. Junsei using this magic can control, alter and even delete entire databases. It is mainly used by flat-screens which are projected into the air and contain information on them. Unlike most Mages, Junsei did not learn Super Archive but rather found a way to simply upgrade and modify his normal Archive magic which allowed to to essentially morph his magic into Super Archive. However, Junsei's since Super Archive actually has evolved from Archive, Junsei can still perform his normal Archive spells through his evolved magic.

Sharanga Bow: Sharanga Bow (色とりどり弓, Irotoridori Yumi) is one of the most important tools in Junsei's arsenal. Sharanga Bow is known for its Holy or Divine-light based abilities that can wipe out evil and darkness with relative ease. Sharanga Bow unlike other weapons does not have a particular well defined form but can be altered to fit any situation. It is a magical energy based weapon that generally passively absorbs ethernano in atmosphere to maintain its form but when utilized by Junsei, it also draws from his magic power, to grow proportionately stronger. The only thing that limits the power of Sharanga Bow is the magic power reserve of the user. As mentioned before, Junsei can customize its appearance and size to suit his strengths or personality. When utilized by Junsei, it takes the form of a compound bow with lever-style limbs meaning it used compound cams to store energy from bending the power limbs, but transferred this power to the arrow using the recurved outboard limbs. The bow can be curl and collapse on itself, taking the form of a small and straight hilt of a sword. The "curling" function allows him to hide his bow or use it as a glow-stick in dark areas. The bow only uncurls to its full length when needed but stays mostly in its curled form concealed in a small metallic cylinder strapped to Junsei's belt. The bow is generally in a mass-less form that neither radiates heat nor expended energy until it comes into contact with something solid. The power of the energy-bow itself is so great that it can be utilized as an improvised weapon for combat and due to its shape altering ability can easily be transformed into a sword. When used as a sword, its blade can generate so much condensed energy that it vibrates with amazing frequency allowing it to trigger explosion in unstable compounds and objects as well as giving it amazing cutting power. The blade can cut through almost anything, although the speed through which it cut dependeds on the density of the subject.

Retrieved from "https://fairytailfanon.fandom.com/wiki/Junsei?oldid=347213"
Community content is available under CC-BY-SA unless otherwise noted.