Kai Leng (ケー レングKei Rengu), formally known as Subject Kai, is one of The Shadow Broker's most highly guarded secret, kept from The Collector by Yukia Yamamoto, she was attempting to create an army of Super Human Mages, in order to present them to her Leader as a gift and demonstration of her loyalty. However, at the age of ten, Kai grew sick and tired of how he was treated, and escaped along with his Exceed partner, Tenzo away from his room by sneaking aboard a sky ship that took them down to a local town in the region of Fiore. After escaping, the duo took on new identities, and began traveling to find where their true purpose in life was at.

Kai has often been shown with long hair that grew from his time training under his mother, and often cut it down to where he was bald with no hair. After escaping, he managed to grow his hair back as Kai is often seen with bangs over his eyes, but still cuts it short to make sure no one acting as an agent of the Shadow Broker would reconize him. His appearance was designed to be able to adapt to any situation when he would be on a mission, making him able to put on any persona if he needed to change himself in a hurry. He was given his Father's face, but instead of having purple eyes, he was given red eyes that can detect anything in it's path.

Due to his enviorment, Kai grew up very sheltered from any normal human contact, aside from the caretakers raising him, and often isolated from any other test subjects in order to establish the concept of only focusing on the task at hand. He is often shy and very apprehensive when it comes to meeting people and letting them get close to him. The only time he often shows his true self to anyone is when he speaks to his Exceed partner, Tenzo, and can tell him just about anything. His sense of right and wrong is something to be questioned due to the teaching that his caretakers have installed in his system. For him, taking something when you need it is considered right, while allowing anyone near him is considered wrong. However, thanks to his relationship with Tenzo, his views on right and wrong changed for the better.

Primal Magic - After being born, Kai was immediatly subjected to several different forms of magic transfers, thanks to his mother and father, until the end result was him learning how to use Primal Magic around the age of four. However, even with six years of training under his belt, Kai has only been seen to be able to turn into the Hybrid stage of the magic, and even then has difficulty controlling it. The only essence he has shown to have absorbed is that of the Rhino Beetle.

Primal: Rhino Beetle - During his training days in The Shadow Broker, his mother was experimenting with creating new species of enhanced animals. After learning the basics, Kai was pitted against an aggressive Rhino Beetle, and after killing it absorbed it's essence giving him his first form.

Enhancement - When using this form, his outer skin becomes slightly covered with a hardened shell along with small horns on his head.

Hybrid - Even though he has achieved this form, Kai hasn't been able to overcome the savage instincts of this form and often doesn't use it. His enitre body becomes enveloped in a thick exoskeleton that doubles his size and covers him in several horns that can deal sevear damage to an opponent.

Enhanced Body - In order to have created the perfect weapon, Yukia modified Kai's genetic structure when he was still an embryo. After his birth, Kai often showed himself to have much better attributes than any other test subject, and even though he is only ten years old, his attributes haven't yet reached their full potential.

Enhanced Speed - His speed has been seen to reach beyond a normal ten year old's limitation, and is still growing with his aging body.

Enhanced Strength - Along with the training in his Magic, Kai is seen to be the strongest ten year old of his generation, and will likely continue to grow due to his young age.

Expert Swordsmanship - In order to have better prepared him for assassinations against The Collector. Thomas trained Kai in the way of the sword, and gave him a large ninjato that he took with him after running away. 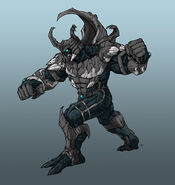 Primal: Rhino Beetle
Add a photo to this gallery
Retrieved from "https://fairytailfanon.fandom.com/wiki/Kai_Leng?oldid=138571"
Community content is available under CC-BY-SA unless otherwise noted.