Levy McGarden (レビィ・マクガーデン Rebī Makugāden) is a 18-year old wandering mage. She is part of Team Aeon, consisting of her, Lisanna Strauss and Lucy Heartfillia. She is a Star Guardian and the keeper of the Dragon Star, Cassidy. She is a former member of Fairy Tail, being kicked out by Karui along with Lisanna and Lucy. She is known as The Star Guardian of Knowledge(知識の 星 の守護者 Chishiki No Hoshi No Shugo Sha) and Cassidy(キャシデ Kyashidi). She has begun a journey with Amara Hirose and Daniel Hirose to get stronger after, Kurai, their master who turned out to be cruel and sadistic kicked her and her team mates out.

Levy is a rather young, petite teenage girl of a slender build who stands at a rather below-average height for her age. Her shoulder-length blue hair, which has eyebrow-length bangs, is normally tied up with a colorful bandanna around her head. While initially portrayed as having rather straight hair, her hair has slowly gained a more wavy, wild look, with more locks hanging down the sides of her face. Levy has a variety of outfits, but her most preferred type of attire appears to be dresses and tank tops, both of which reveal the guild mark on her left scapula. When performing tasks such as researching, she wears a pair of Gale-Force Reading Glasses and tends to tie up her hair to keep it out of her face.

Levy is a kind and warm girl. She is social, cheery and forgiving. She likes making friends and is not afraid to stand up. Though before she wouldn't get fight often, Levy enjoys fighting now though she still prefers defense to offense. Levy view fighting as a fun way of socializing and a good way to training. Her forgiving personality now though has seemed to have faded quite a bit as she now doesn't forgive someone easily, even for playing practical jokes. Though she doesn't get mad like Lucy, Levy has quite the temper though she doesn't show it. Though alot has changed about Levy, her love of books will not change. Unlike Lucy, she still loves books more than anything else. She is often the one to give information of things due to her vast knowledge and knows many useful spells like a de-materializing spell.

Solid Script (固体文字, リッドスクリプト Soriddo Sukuriputo): True to her boundless interest in books, Levy's Magic is also focused around writing and words: Solid Script, a form of Letter Magic, allows her to generate words in the air and make them solid, subsequently throwing them at the enemies with different effects. To create such words, Levy is shown performing gestures with one or both of her hands, depending on the spell. 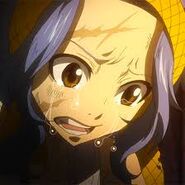 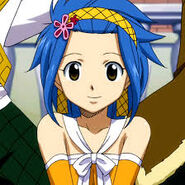 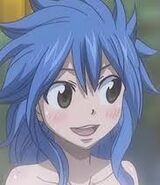 Add a photo to this gallery
Retrieved from "https://fairytailfanon.fandom.com/wiki/Levy_McGarden_(Wendy)?oldid=244399"
Community content is available under CC-BY-SA unless otherwise noted.