Lucy Ichino (ルーシー市野) is a mage. She is a one of a kind mage who is seen travelling with her bro's and the Palico triplets. She is known as the celestial princess from her spirits.

She is has Blonde hair with Red eyes and she is seen in different clothes but the main one is a brown jacket with Purple shirt with a feather with Khaki pants.

She is calm most of the times and usually happy when she is around her spirits and brother's and is sometimes annoyed if her spirits misbehave.

Twin Katana's She carries twin katana's around since she had been trained in combat with these katana's of hers.

Celestial keys She has her keys in a pouch thing thats located on her pants belt.

Linking Ability Where she is able to use the magic her brothers have.

Celestial Magic A Magic in which the user summons Celestial Spirits by opening their gates through the use of Keys. These Keys are separated into two classes: the more common Silver Keys, the rarer Gold Keys and the limited Black or Red Keys. Keys for Celestial Spirits are counted in Units (collectively without regard of Gold or Silver), and a Celestial Spirit Mage is noted by how many Units they have obtained.

Gate of the heavens Aphrodi. 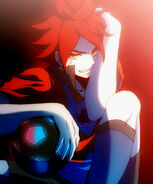 Gate of the Firery Sun Burn.

Gate of the Frozen Darkness Gazel.

Gate of the Lightness Dragon Hakuryuu.
Add a photo to this gallery
Retrieved from "https://fairytailfanon.fandom.com/wiki/Lucy_Ichino?oldid=386208"
Community content is available under CC-BY-SA unless otherwise noted.