"Boy, let me ask you a question. Do you know where hell is? If you keep blabbering on about our laws, I'll be more than obliged to show you..."

"Bunch of hot-headed idiots who dream that they have power"

The ruling body and figure of power in Seven, the Magic Council has often been commented on as being unnecessarily vicious against law breakers. Often referred to as the Council of Seven, due to the fact that the core members hold Seven members, the Magic Council holds power over all Light Guilds, as well as Independant Guilds.

The average Magic Council holds the responsibility of upholding the law and keeping a watchful eye upon guilds as they are responsible for a mage's actions. However, the Council of Seven has completely neglected those duties, instead opting to rule with what Silas calls "an Iron Hand that you can't even see".

By working mostly in shadows and unseen by the public, the Council of Seven has become rather strict on the law, going as far as to execute a citizen for vandalising Guild Property. However, their actions are not always this brutal. Every actions ruled by the Council goes through a vote consisting of initially 6 members. In the event that the votes become tied, they call upon their seventh "Member": the rest of the council. This way, whatever they vote, it will always end up 3-4.

The seventh and final member of the Council is the rest of the Council itself. Made up of a total of 3254 mages, the seventh 'member' is only called upon when there is a tie-breaker on a decision i.e. An article has votes 3-3. In the event that the seventh seat is called upon, the vice leaders of each branch collect the votes, tally them up against the other branches, and them come to a conclusion of what their decision is. In theory, the seventh seat holds much more power than everybody else, as if an article that they all strongly dis-agree with gets passed, the majority can easily quit or suspend themselves, effectively putting a hold to the Council.

The Council of Seven, as mentioned above, has six specific branches. In order of rank, these are: International Affairs, National Treasury, Council's Servitude, Law and Order, Research and Development and National and International Information. Despite the fact that they are under the title of the council, some of these branches are created to suit a Council member's own preferences. For example, the R&D branch is not vital to the standing of the council, however it was created from the request of Ladon. Likewise, the branch of Council Servitude only serves to ease the council's duties. 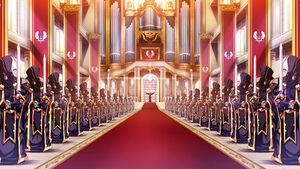 The International Affairs room has been redesigned constantly to the point where it now resembles the classic castle throne room. The room holds several golden walls, with a shiny marble roof that reflects all sources of light, giving it the majestic glowing appearance day and night. The very back wall of the room has been designed to resemble the Council Building's entrance for unknown reasons. The floor is adorned with a single, long red carpet that leads from the doors all the way to the very back, where the Council Head is usually occupied.

The Council of Seven's International Affairs Branch deals with complications outside of Seven that concern the country's safety. This would include concerns such as a trading route becoming blocked, an oncoming invasion and the appearance of any mythical beasts i.e. Pheonix, Dragons or creatures born from Zeref's magic. The council's usual course of action involves sending in a squadron of mages from the Law and Order branch to personally deal with the threat. In the event that the threat is increasingly dangerous, the Council holds full authority to commence an evacuation of most of Seven.

The Magic Council's Treasury is one of the few branches that serve as a means for the country to survive. Headed by Sephire Corowon, the Treasury is in charge of any financial complications within the borders of Seven. Taking care of expenses, rents, shares, sales and many more, the treasury is also the branch that is responsible for anmy tradings. Due to the fact that their services reach only to the borders of Seven, anything that occurs outside of the border is not ellegible for dealing, meaning that it is a major source for scams. However,t hisis quickly fixed by the International Affairs Branch.

One of the three branches that were created for the benefit of certain people, the Council's Servitude is a branch composed of mainly butlers and female waiters, seeking to benefit the Council through several subsections. Unlike the other branches, the Council's Servitude holds two captains alongside it's leader: Elencia Crimea. The first captain, known by the title of Baron, specializes in bars, and as such, is a bartender himself. The other captain, the Ace, is in charge of service such as waiting tables or refurnishing areas. Despite the fact that they serve others, the strength of this branch is capable of actually surpassing the Law and Order branch. 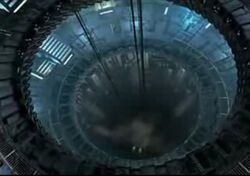 The most feared and infamous branch in the magic council, Law and Order deals specifically with any criminals. Althoguh their sense of what a criminal is can drastically change when compared to other countries, the Law and Order's army is still a force to be reckoned with. Composed of exactly 400 individuals, each mage is trained in the art of execution. Should one of the mages die or retire, they would be replaced by another mage, thus strictly keeping the number to 400.

Mentioned earlier, the Law and Order branch deals with criminals and dark acts, actions taken while under the influence or threat of a dark mage. The usual course of action is a swift beating, followed by being taken and imprisoned in the Magic Council's prison. The prison is a large, underground spiral, holding 4 floors, each floor ranking the criminal's crime, with the final floor belonging to the worst. The prison holds, rather than shared cells, countless single, square rooms that are covered in so many magic seals that they filter and seperate Eternano from the Air itself, thereby preventing the imprisoned from recovering any magic.

Interestingly, despite the fact that it is a branch that is not necessary to the survival of Seven, the Research and Development branch is located at the very top of the Council building. Holding an aerial view of Seven, the Reasearch and Development branch, obvious to it's title, focuses on inventing gadgets and collecting data from unknown species. They are suspected to be responsible for the creation of the Guren however, this is mostly just a rumour. The branch is headed by Ladon, created per his request. 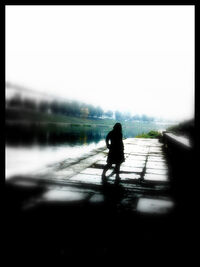 The final branch in the Council of Seven, the N.I.I is a branch dedicated to basically spying on certain individuals around Earthland that are suspected of criminal acts. Despite the fact that their jurisdiction spreads across the whole of Earthland, members of N.I.I will only investigate former citizens of Seven. Meaning that, if a mage from Fiore commits murder in Seven, they will not be bothered by the branch. Likewise, if a mage from Seven commits an act in another country, the N.I.I will leave them alone. the only exception being if a mage from Seven commits the treason in the country itself.

They are, in a way, the backbone of the council, reporting any actions to the Council. Meaning, if there is any loss of money, the Treasury will see to it, a criminal act would be reported to the Law & Order branch, and any mysterious races being brought back to the R&D.

The page will be fixed up later, just that I had to get this over and done with.

All the Core Members will be put into one page, since all that would be needed would be their appearance, personality and magic abilities.

Retrieved from "https://fairytailfanon.fandom.com/wiki/Magic_Council_(Nowie)?oldid=360454"
Community content is available under CC-BY-SA unless otherwise noted.