Marie R. Rosel (Maari R. Reezeru, マリーレーゼル) is a female mage that originally came from New Estal. But was brought down to Earthland when Regan Mercer Frey rescued her from imprisonment. She was born in X530 and is currently still alive to this date, making her 261 years old. The reason behind her eternal / pro-longed life-span is because of her Vampire Magic. Which makes ones life longer and preserves ones young beauty, in return that they must feed on a living soul's blood atleast once a month. She was originally one of the first 'Grand Aristocrats' in New Estal's Republic, but left that position during 'The Fall'.

Marie R. Rosel has messy, long to mid range pink hair that matches the same shade of pink as her eyes. Her hair falls over her shoulder and she has two strands of hair that are parting from her forhead. She keeps her hair hanging down by having two roses on each side of her hair where the parting strands are to keep them apart. She has wide eyes that are a bit more widespread than usual and open. Her skin is slightly more pale than a usual human being, and it is also incredibly soft and smooth. She has a nice, slim and curvy figure which, together with her skin, makes her look astonishingly beautiful figure which matches her color scheme perfectly.

Before 'The Fall' of New Estal, her clothes were more wholesome and modest, compared with the provocative lingerie she currently wears. She could usually be seen in long, floor length dresses that were heavily frilled and decorated with ribbons and bows. She kept her hair pulled back from her face and pinned it up with roses and laces. She seemed very feminine and royal while wearing these types of dresses. She would often wear corsets below her dresses, which in her later days

Since 'The Fall of New Estal, she has always been seen wearing her Rosel blood red coat that she wears over her normal attire which has white and red outlined stripes around the edges of the coat. The coat also has a lether going down it from the right side of her coat, near where her heart is. And at the end of the lether strap is a silver medal that indicates that she was once a part of the New Estal Republic. Underneath her cloak she has her usual outfit, which consists of a lowcut dark red corset with a frilled pink trim, paired with a black and pink ruffled skirt. She also wears a pair of stockings with suspenders and high heels, and a shirt collar choker around her neck. On her hands she wears a pair of light pink kid gloves, and her wrists and ankles have been shackled with broken cuffs.

Marie's full appearance after 'The Fall' 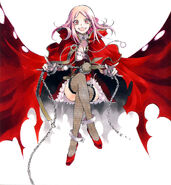 Marie, taking out her anger on a doll when mad.

Before 'The Fall' of New Estal, Marie was a calm woman who worked hard as a 'Grand Aristocrat' for New Estal's Republic. She would always seem cheerful and happy, even when smaller incidents happend. She was a kind woman who wished to help anyone and everyone that had trouble, no matter how small the problem was. She was also very shy, especially towards men. She would blush like theres no tomorrow whenever speaking to them, even if it was someone who she wasn't interested in. She was like an angel, always doing the right thing at the right time and place with nothing but perfection.

Whenever she is around Regan Mercer Frey, she will always seem happy, shy and enthusiastic about almost everything that is possible. She is extremely attached to Regan Mercer Frey because he was the one who freed her during 'The Fall' of New Estal. However, should she be annoyed or someone threatened her or Regan she would not hesitate to become cold and shut down her emotions and gruesomely murder them and anyone that might annoy her while she is in this mode. The mode itself is something that the members of the Dark Legion team calls 'The Blood Surge'. After she is done with her task she seems to forget and ignore anything regarding that ever happening. she is a lot like Yandere, should anything stand inbetween her love. She will get rid of it, no matter what that requires.

In her early days, and before 'The Fall' of New Estal. Marie was always depicted at an energetic, happy, shy, curious and loving girl. She would always walk around in the streets with a smile, being as energetic as she could possibly be. Both of her parents had the same case, they would never be seen with a frown on their face and would always try to keep the atmosphere around themselves, and others, good and happy.

However, after 7 years in her position. She and her parents were accused of intending to destroy New Estal Republic now that she could make laws. After finding false evidence that proved for this accusation to be true, she was forced to go into hiding. Because she was loved by so many, there were many civilians who stood up and demanded for her to be free because the thought of her doing something like that was unthinkable. And naturally, a civil war broke out, a war that took many lives and shook the country forever. However, after one year of constant fighting between the side that wants to imprison Marie and her parents, versus the ones that wished for her freedome to be true. The war had ended with the victorious side being that of the New Estal Republic. Her parents were executed at the spot, but because of her position, Marie's life was spared. However, what the New Estal Republic did not know of was that Marie had an eternal life-span. Meaning that she would be sitting in jail until something or someone finished her life.

Skipping forward to the year of X777 and Marie had almost lost her last drop of sanity. During this year, a man named Regan Mercer Frey came from Earthland and up to New Estal. And shortly after hearing of her imprisonment, he decided that he would free her and escape; and so he did. After helping her escape from New Estal's Prison, and having no where to go as they were surrounded at the edge of the imprisonment island. Regan pushed Marie off of the edge and then jumped off himself. During the moment of the free fall to certain death, Marie had already accepted the fact that this was too good to be true and that she was about to die. However, shortly afterwards she felt Regan's body fly right past her at an incredible speed. And shortly after watching him land on the ground and create a crater, Marie braced for impact. However, after holding her eyes closed and waiting to hit the ground for a couple of minutes, she finally dared open them. Only to find out that Regan was holding her body afloat over the ground with his magic.

Silver Chain - Marie R. Rosel has a chain made from silver that is inforced with Adamantine so it can sustain more damage and powerful blows. The Silver in the chain works as a current for Marie's chain, allowing the chain to become even more powerful when imbued with some of Marie's spells. She has had the chain since she was 10 and it still has yet to show any sign of damage  to it.

Marie is constantly using her Vampire Magic inorder to stay alive because her life depends on it. However, because all she did was to stand still in prison during the 'Magical Revolution' in New Estal. She managed to get more Eternano storage. Which she uses as a safety-storage to stay alive.

Seduction Magic allows Marie to use various spells that are affiliated with love and lust. Using the different spells, she can take out multiple enemies, gather information or control people indirectly.

Retrieved from "https://fairytailfanon.fandom.com/wiki/Marie_R._Rosel?oldid=580653"
Community content is available under CC-BY-SA unless otherwise noted.