"So? this you call a family? just people who thinking herself, a true of my family is fairy tail! They caring about me! Not see if i'm a human or vampire!I'm not allow you to hurt my family!"

Princess Of Vampire , Megumi-chan by Lucy, and Megumi-san by Wendy and Juvia

Megumi Ishikawa (石川めぐみ Ishikawa Megumi?) is the daughter of Ishikawa Clan, the rich clan at Fiore. All member of Ishikawa family is a Vampire, they called The Last Vampire . Megumi turned into a human for wanting to live a normal life as a human, her human name is Megumi Ibara (荊めぐみ Ibara Megumi?). Megumi met with Team Natsu when she was playing "Ice Skating" on a frozen lake, just like Lucy before Megumi directly offered by Team Natsu to join as a member of fairy tail, especially since the team natsu need 1 person to join "Crystal Party".

As A Human She has short and wavy dark blue hair with a slightly longer fringe, and it's usually clipped back with a green clip attached with three silver hearts. Her eyes are round and blue.

As A Vampire She has extremely long silver hair and light blue highlights at the tip. Her hair is styled into a complicated hairstyle, it braids up into a bun, then it seems as if it sprouts into twin drills. She also has sharp, but thin dark purple eyes.

She Is a nice person, she is always calm, mature and well-behaved in front of an audience. When as a"Vampire" her personality turn into more serious and bit more selfish. Megumi very loves "Ice Skating" and "Singing". She is in love with Ren Takahashi and blushes whenever she thinks about him.

Megumi was born in a family of vampires who are very rich in Fiore, which Ishikawa Clan is located in Onibus Town. But at the age of 16 years, Megumi intend to run away and live as a human. Megumi was living in Mangolia Town, and Megumi also bought a house close to the beach in Mangolia Town.

after Megumi transfrom into a human, she find a frozen lake. She do a dance while ice skating, without realizing it, Megumi dances watched by Team Natsu. Megumi was told his name, at the same time Megumi offered to join Fairy Tail. Megumi gladly accept it. the next day Megumi finished her first mission is "Crystal Party" and joined Team Natsu.

Shiny Star Fantasia (シャイニースターファンテイジア, Shainī sutā fantajia?) is the powerful attack from Guitar Magic. Megumi split her body into 2 , the vampire version and human version. they face each other while the enemy in middle and began to play his guitar. At the time of playing the guitar appear stars from the guitar to the enemy. When Megumi mention attacknya named Shiny Star Fantasia appeared very bright light in the enemy place, it makes all the people become cannot see because the light is very bright unless Megumi, she can see. The enemy was defeated.

Darkness : Teleportation (闇：テレポーテーション Yami : Terepoteshon?) : The user seems to be able to teleport by turning themselves into many runes. These runes float in the air freely and go to the place where they unite to form the user's body again, just like Dark Ecriture : Teleportation.

Darkness : Spread (闇：スプレッド Yami : Supureddo?) : The attack starts off as the surrounding area turns into a dark sky and Megumi rises up as a circle of dark light in colors of dark purple around her. She then pushes herself back and releases that dark light which quickly spread up the whole dark sky in the form of a darkness aurora are spread throughout the place, don't care to the enemy or friend.

Dark Ray : The user fire a powerful ray of Darkness Magic from their hand towards the enemy.

Dark Wave The user dashes towards the target, jumps and from their fist a giant wave of darkness appears, which pushes the target to the ground.

Darkness : Shield : By utilizing their Darkness Magic, the user erects a transparent,dark purple barrier to protect themselves from the opponent's attack.

Darkness Body : Megumi turn her body into darkness. Megumi rushes toward their target and either surrounds them with darkness light them.

Urano Metria (ウラノ・メトリア Urano Metoria): A powerful spell, known as the "Ultimate Magic of the Stars", Megumi do this attack with Lucy Heartfilia. When fighting with Cross Guild.

Transformation (変身魔法 Henshin Mahō): Megumi has mastered the rudimentary skills of Transformation Magic. proved when Megumi could change her identity as a human being and change her physical shape in a long time.

Enhanced Strength: In stark contrast with her slim and womanly figure, Megumi possesses a very large amount of physical strength, having been repeatedly shown capable of lifting and dragging around objects many times her own size and weight

Keen Intellect: Megumi has proven herself to be a very intelligent, logical and intuitive Mage. She was able to figure out that Hiroko attack before Hiroko do her attack.

heal herself automatically : As A Pure Blood Vampire, she able to heal herself when there is little or a lot of injuries.

Increased sense of smell : as a pure blood vampire she good with smell something.

Increased strength and speed : as a pure blood vampire she have a strong strength and high speed when fighting.

Ability to turn humans into vampires and retain complete control over them by becoming their master.

Megumi in a park

Young megumi as a vampire

Megumi told Hiroko she never back to home again 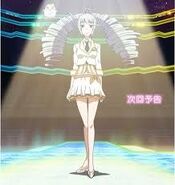 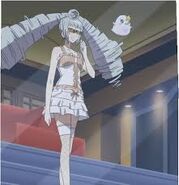 Megumi shock and get her memory back

Megumi crying because know her fault

Retrieved from "https://fairytailfanon.fandom.com/wiki/Megumi_Ishikawa?oldid=585261"
Community content is available under CC-BY-SA unless otherwise noted.