Nanami Kimihara is a young girl who is fond of singing. She is Lunar's cousin and partner. Lunar is fond of calling her "Rosalie". She is an S-Class Mage of Silver Rose.

Unlike Lunar, she is more mature. She sometimes help Lunar escape the palace so that they can play together in their younger days. She is also very emotional.

Nanami is a 15 year old girl with rose hair and blue eyes. She usually wears a black vest with gold trimmings. She has a black skirt that reveals most of her right leg and a belt. Her shoes is black with gold trimming. Her guild mark is in the same spot as Erza's but pink instead of blue.

Nanami can also control marine animals and water like Lunar but she can't breathe underwater. She plays the flute well, though.

Voice Magic is her primary magic. She can allure and distract opponents or even increase the level of her voice to almost physically damaging levels.

Arc of Time is a form of Lost Magic that Nanami uses. 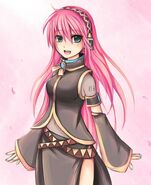 Nanami, age 13, in winter clothes.
Add a photo to this gallery

Retrieved from "https://fairytailfanon.fandom.com/wiki/Nanami_Kimihara?oldid=45445"
Community content is available under CC-BY-SA unless otherwise noted.