Nefretete Duse is an S - class mage of the assassin guild called Death's Head Caucus, where's she's one of the most powerful killers. In fact, she got the title only because of her unique skills of Molecular Manipulation, a powerful kind of Magic, used only in her family. Her magical abilities granted her the title "Melting Nefre". As a child, she wanted to be a writer, but when her parents found out that her amount of inner energy was much enhanced, they decided to train her, even that they had made up their minds and had refused to treat her as a mage. At the age of fourteen, she accidentally burnt a kindergarten, 'cause she couldn't help feeling mentally abandoned by her mother and father. Then she decided to join a dark guild, 'cause the emperor wanted her to hang in the centre of the town square. However, after she had almost killed a guard with her uncontrolled, new power of Molecular Acceleration, the master of the guild Death's Head Caucus saved her from being punished. 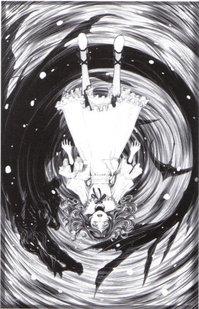 Nefre's bad memories.
Add a photo to this gallery 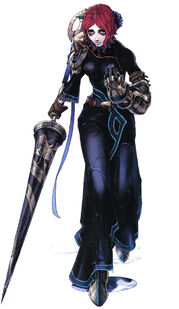 Nefre's full appearance
Add a photo to this gallery

Molecular Manipulation - it's a powerful and unique magic, which granted her the title "Melting Nefre". It allows her to apply changes to the movement of molecules in order to gain various effects. This ability is used only in her family and she's the last person, who uses it, because her roots went extinct. For now it isn't considered a kind of Lost Magic, but it is usually based on emotions buzzing in her soul and they mostly decide if the current attack should occur. This magic is not normal, because it develops out of the blue, when the user utilizes it too much. The most powerful user of this Magic was Loreal Faerisch, who lived three hundred years ago. Some people say that she cold even get rid of the whole town, but it's only a rumour, based on "old women's memeory". It is considered abnormal to fight with Nefretete - the reason is serious.

Retrieved from "https://fairytailfanon.fandom.com/wiki/Nefretete_Duse?oldid=265279"
Community content is available under CC-BY-SA unless otherwise noted.