Nekomata (猫股, Nekomata) is a cat like Yōkai who can assume human form at will. Nekomata was known for his predatory skills and hunting down several humans at night. However, after meeting and befriending Seraph Kinmichi, he has become much more kinder and has stopped killing humans altogether. He instead now feasts on the souls of small insects, fishes and on human food. 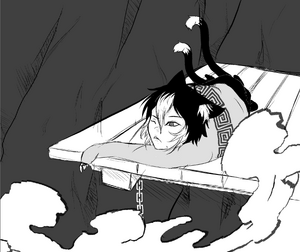 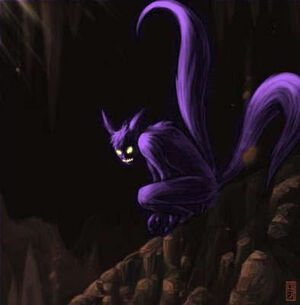 Transformation (変身魔法 Henshin Mahō):Transformation Magic is a Caster Magic utilized by Nekomata to transform himself into a human. Assuming human form helps him blend in with the rest of the human society. In this form, Nekomata's magic is decreased a bit and he must assume his true form in order to use his magic to its peak potential.

Fire Magic (火の魔法 Hi no Mahō): Fire Magic is a Caster Magic that utilizes the element of fire. A form of Magic that revolves around the use of fire, allowing the caster to conjure, manipulate, and control the element for various purposes.

Levitation Magic (浮揚マジック Fuyō Majikku) : Levitation Magic is a Caster Type Magic utilized by Nekomata that allows him to magically levitate objects, people and himself off of the ground.

Retrieved from "https://fairytailfanon.fandom.com/wiki/Nekomata?oldid=337717"
Community content is available under CC-BY-SA unless otherwise noted.