"Brothers stay together no matter what"

Nero Blader (ネロブレイダー, Nerobureidā) is a former dark mage. He is an expert in using his magic and is the second oldest out of all of his siblings. He is also the younger brother of Zero Blader and the Older brother of Rose Blader and Raven Blader.

Nero wears deep ultramarine full body tights covered in Runic protections. He has teal blue hair and red eyes. He isn't as handsome as his brother but he does have the looks. He a Hawaiian shirt and black pants when he is out. Nero's guild mark is located on the back of his neck.

Staff Magic (スタッフマジック, Sutaffu majikku): Nero's signature magic along with Zero, which he has mastered. It allows him to channel magic into his Blades Staffs and turn the magic into powerful attacks. The magic allows him to deflect and absorb some magic. 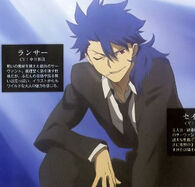 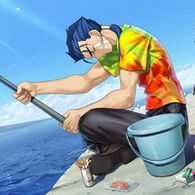 Nero and Zero as teachers

Genderbent Nero
Add a photo to this gallery
Retrieved from "https://fairytailfanon.fandom.com/wiki/Nero_Blader?oldid=273421"
Community content is available under CC-BY-SA unless otherwise noted.