The new genesis guild building is located in the southern most part of Fiore; this is because the unorthodox mages are not accepted among the normal legal mages. The guild building lies 3km above a seemingly bottomless cliff, and as such is not surrounded by any other buildings or guilds. The location in which its stabilized is very rich in nature, being surrounded by large trees and a nearby lake which can be found on the small islands surrounding the guild. The guild members call the guild building The Citadel.

The Citadel Side View 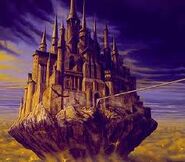 The Citadel
Add a photo to this gallery
The interior structure of the building has a ten floor capacity. The first floor, which is level with the entrance, holds the guild's commons, where food and beverages are served. The second floor is where the normal jobs request board can be found as well as the S-class request board and the many sub divisions of the S-Class jobs. The third floor is the library which holds information on all the guild's magics as well as it's history (which is rather long). The forth floor is the tech center where the guild members may purchase magic items and weapons to use on jobs. The fifth floor is the communications center where all guild communications are centered this is also where the guild members golem (machines created by the guild that are provided to all guild members. They look some how like bats and are semi-organic in nature) transmissions are monitored, it's also known as the observatory. The sixth to ninth floors are used as the guild's suites. Because all of the guild's members do not own or live in a separate home, the guild building. Due its wide structure, it provides an abundance of small suites where the members make their housing quarters. As for the tenth floor, noone except the guild master and S-Class members knows what is there and are even allowed up there.

New Genesis is widely known as one of the most powerful of the Unorthodox Mage Guilds. Of course, this status just makes the guild more disreputable around the continent.  Of the twelve members of the Black Order Mages, four of them belong to New Genesis, these being two of the S-Class Mages of New Genesis. The guild has quite a few enlisted members as such their guild strength is quite high placing them in the league of the major guilds in Fiore such as Fairy Tail.

The top members of New Genesis have made widely known names for themselves, though these names are feared.

Retrieved from "https://fairytailfanon.fandom.com/wiki/New_Genesis_Guild?oldid=194120"
Community content is available under CC-BY-SA unless otherwise noted.