Nikolai Ichor (ニコライ膿漿, Nōshō Nikorai), is a greatly powerful Mage of Flore. He is the Guildmaster of the guild Pantheon. He is the first Guildmaster and is called the Sōzōshin (創作の神様, God of Creation). Among the Toveri Alliance he is one of the most powerful mages.

Nikolai Ichor, is a sightly tall and athletic man, appearing youthful in his mid twenties. He is blessed with crystal blue eyes and golden blonde hair. He normally wears formal attire that befits a monarch. He wears gloves that are worth over 100,000 Jewels.

A confident and protective personality Nikolai has amassed over the decades. Originally he was seriously arrogant and boastful of his power. During the years, he researched magic to better his magical talents. Before he was both blessed and cursed with eternal youth, he had a certain belief system. He had thought magic was the power that created the world and he wanted to understand the origins of the world.

As the founder and guildmaster of Pantheon, he acts in a combination of a father figure and as a king to his guild. While, kind and forgiving he can be harsh. Whenever, a blood relative joins the guild he does a bit of favoritism towards them. He does grant them special privileges but seem to demand more from them. He despite talking in calm and intelligent fashion, he often has a foul mouth when he talks, something he knows about himself and rarely attempts to change it. He can be somewhat playful, calling vetern members of his guild "children" to where Drake Emryst is called a "boy" by Nikolai.

Nikolai was born to the wealthy Ichor family over 126 years ago. He lived in a castle which would later become Aconite Town. He was the oldest of a set of twins. He from even from being a newborn; had powerful Magic Power. His highly innate Magic Power was so powerful. It would make children that he would play with pass out. By the time he was six only seasoned mages could be around him.

Genius Intellect Nikolai, is a profoud intelligent individual. He has over his 126 years alive has learn numerous things. He is very perceptive of the world and its properties. He is by far the most intelligent Mage in the guild. Even surpassing Carlito Play's own great intelligent.

Immense Magic Power: Nikolai possesses an immense level of Magic Power. He possess the highest level of Magic Power, in the guild. His power is masterfully refined, most mages cannot perceive his Magic Power because of this. While the true numeric value of his magic is unknown, he scored 9999 on a MPF which destroyed it, however by his own omission he said that his standard power is estimated to be 15,689 if MPF could score beyond 10,000. The Ten Wizard Saint have compared his power in the same class as God Serena the former strongest Wizard Saint if not surpassing him all together. His power has even been states to overpower the typical Spriggan. The color of his Magic Power is white.

Telekinesis: Nikolai's primary magic, is Telekinesis. His telekinetic magic is shown to affect organic as well as non-organic matter, sentient or not; as well as non-physical entities like souls. He can also use pure kinetic energy, for combact and defense. He can send out powerful shockwaves as well as make a highly durable barrier of telekinetic power. He can cause damage to a bodies of his targets like pushing into walls, pulling them to him, making them float/fly, or pull them down. His skill is high enough to crush organs, break bones, or affecting blood flow, ex slowing it down, speeding it up, or stopping it completely. He is skilled enough, to manipulate other elements. To the degree to where others think he has other kinds of magic. Nikolai even has the power to manipulate other magic that other use against him. However, that is a case by case some can wrestle control of their magic from his control. His skill is refined enough to not even needing to see what he is moving.

Creator's Eye: Nikolai is a user of this highly ancient and powerful Caster-type Lost Magic. This is a Subspecies Magic of Eye Magic that enables the user to exert their "reality" over an immediate vicinity of an unknown range.

Heaven's Garden: A powerful uncategorized spell. Consideration a supreme healing spell. Drawning on the caster's lifeforce heals others even those near death. It even can restore inorganic material item that are damage.

Destruction Magic: A powerful destructive Subspecies Magic of Crash Magic. It creates a sphere of scarlet and Raven colored Magic Power. It begins by snapping Nikolai's fingers. It releases a small sphere of the pre-described colored Magic Power. However, as it moves it can absorb either the Magic Power of the Caster or the Ethernano from the surrounding areas to grow. The magic is extremely volatile and difficult even for Nikolai to completely control. Mostly due to Nikolai only having a base or average knowledge, of its mechanics.

Eternal Youth: As a result of his Life Balance spell, he gained immortality known as eternal youth. However it is dependent on his casting the spell daily.

Nikolai has no Edolas counterpart. This cause he is one of a million people on average, that are so unique they don't have a counterpart in any fashion.

Nikolai is has a slight case of germ phobia, so he takes bathes often sometime more than twice in a day.

His surname Ichor, is a term for the golden fluid that was the Greek god's blood. This golden blood retained the eternal youth and invulnerability aka immortality they achieved from eating the sacred Ambrosia. This reflects in Nikolai's and all his S-Class's mages' eternal youth.

This character shares images and themes with the character, Luther Landsfeld from the Star Ocesn series. 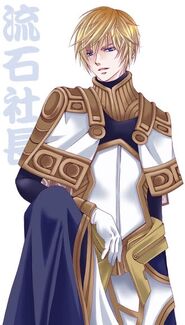 Add a photo to this gallery
Retrieved from "https://fairytailfanon.fandom.com/wiki/Nikolai_Ichor?oldid=618672"
Community content is available under CC-BY-SA unless otherwise noted.