Nymphadora Griffin is a female mage and uses Take Over and Chain Magic .She is cousin to Ridhwan Griffin , Armaan Griffin and Nigel Griffin .Nym is Satoshi-Toshi-shita Griffin 's daughter.

Nym is a rather attractive and deceptively young-looking middle-aged woman with long,sharp white hair and blue eyes.Like her mother,her skin is very pale and bears an amazing resembelence to her.

Nymphadora was a shy child and always smiled whenever she was with Satyresses and she was regularly at her side, holding her hand.Despite being a crybaby, Nym started to smile again as soon as she saw Sat(Her Mother).Although,Nym can go berserk and start killing people when she saw her mother getting burned,She suffers from histrionic personality disorder.

Nym displays a very strict,proud,cold,mature,serious,strict and impassive demeanor.She is a bit mischievous,usually smirks mockingly and finds it entertaining to challenge Ridhwan Griffin . Nym becomes disappointed when Rid(Her Cousin) manages to defeat the challange she arranged for him, wanting to see Rid on his knees for once. After an accident in her life she went into hiding her emotions and her smile to everyone.Nym's pride for herself was shown when she fought Jasmin Hale ,a childhood friend of her cousins.She looks down on people and shows no mercy in combat.

Nym is shown to be very protective,affectionate and possessive of her younger half sister Annabelle Griffin , and gets easily angered when she is in the company of Izrail Paku (Anna's fiancée).She even threatens Izrail that if anything happens, she would never forgive him.Nym is unwilling to give her little sister to Izrail as his bride.

She is shown to be just as bloodthirsty and violent as her half brother Phoenix Griffin when he was a child,in a fight she displays a complete confidence in her own skill and power, regarding her opponents calmly and often taunting them in mid battle.Nym enjoys teasing her cousin Ridhwan Griffin , frequently making marks about his poor parenting skills.After Rid,Armaan and Nigel's parents were murdered, she is openly disapproving of Rid as his younger brothers' guardian.

It is also shown that Nym is extremely fond of cute things, especially stuffed animals.

Nymphadora was born on May 5 to her father,The Heir to Griffin Family and her mother,Satyresses .Like many of her siblings,Nym is a bastard.When Nym was born,Sat(Her Mother) thought Nym was a very beautiful child and since it was spring,Sat decided to name her child Nymphadora.As a child,Nym was shy,a crybaby and smilied more.

Nym was close to her half brothers Phoenix Griffin and Sphinx Griffin(Who were the very few people who were close to her age at that time) as well as cousins Ridhwan Griffin , Armaan Nigel and Nigel Griffin who often met her and played with Nym and her half brothers.Since Nym's father kept his children at Griffin's land and he rarely let them out,espacily to his younger children(One of them was Nym).This lead Nym to be a non-sociable child.

One day a group of people came to Griffin Manor to hunt/kill the Griffin family members.Knowing this,Sat and Nym ran for safety and hid.The area where they were hidding had a wardrobe.Putting her child's life first,Sat locked Nym in the wardrobe and promised her they'll meet again.Eventually,the hunters came and started torturing Sat,even though she wasn't part of the Griffin Family.Nym desperately watched as her mother was torture.She wanted to go and have them kill her instead of her mother getting tortured but Sat gave her a sign telling her not to go out.

One of the hunters saw her sign and threatened her to tell them where was Nym.She refused to tell them so they made her torture much painful than before.After a while,a woman from the group grew tired and stabbed Sat in the chest.When Nym saw this,she couldn't think,hear of feel anymore.She only cried and desperately tried to get out.The woman who stabbed Sat pulled her hair and asked her where was Nym.Again Sat refused to answer and the woman kicked Sat in the stomach so hard that it sent her flying to the wardrobe where Nym was locked.

A man from the group started striking a match and threatened Sat.Somehow,Sat was able to stand on her own 2 feet and declare,"How many times you te-te-te..a...threate-ned..me..I won't...tell you....I...will...ne-never tell you....a...in...my entire..le-life...where...my...child.....IS!!!!!!!!" after Sat spoke her final words,she picked up an axe from the floor and started charging at the hunters.Some of them lost their lives while others were to terrified of Sat,they kicked her and started a fire.

As Nym saw the fire burning her mother while remembering their moments together,she went berserk and ran out of the wardrobe taking the axe from the corpse of her mother and started killing the hunters.After this incident Nym started suffering from histrionic personality disorder which leads her to what she is today.

Take Over :Nym is a skilled user of Take Over, a type of Magic which, as the name suggests, allows her to take over the powers and abilities of particular creatures she really "knows".

Fallen Angel:Nym's Take Over spell allows her to have the abilities and powers of a fallen angel being.She gains the ability to fly, and her physical strength and speed are dramatically increasedIt is similiar to Mirajane's spell,Satan Soul.

Flight:A pair of big,black wings come out of Nym's back allowing her to fly.Nym's wings are made of sharp feathers which she can uses as spears.

Enhanced Speed: While in this form, Nym's speed increases that she is almost as fast as lightning(As seen when she fights Laxus Dreyar)

Enhanced Strength: When employing her demonic powers, Nym's strength is increased to the point where she can easily break through solid rock with her punches.

Chain Magic :This Magic allows Nym to shoot long chains from her hands, complete with grappling hooks at the ends. These are capable of piercing through foes without actually hurting them, allowing her to grasp opponents and smash them around against surrounding objects.

Master 'Swordsmanship Specialist:Nym's skills in swordsmanship are of the highest caliber. Her offensive capabilities mainly come from her past.In addition, her sword slashes possess so much force behind them that they are able to slice through metal using only the air pressure from the swings.

Strength:Nym is shown capable of breaking a large table in two with a simple downward movement of her hand.

Anna is the second most loved and important person in Nym's life(The first being her deceased mother) .With only 12 years in between their ages,Nym and Anna share the same father but different mother thus making half sisters.Despite of this Nym and Anna are just as close as full blood sisters and consider each other as best friends,caring for each other deeply.They have lived under the same roof for many years and played with each other in their childhood.

Nym is very fond and protective of Anna and would do anything in her power for her sister's life. Since Anna's mother was murdered in the noble hunt Nym decided to love and raise Anna as a mother. Once Nym became aware of Anna's disease/illness Patrocanluna she became very affectionate and possessive towards her younger sister to the point she disapproves of Izrail Paku becoming Anna's husband, much less having Anna near Izrail.

Jasmin and Nymphadora have been rivals ever since the fight they had between each other.The two of them fight constantly whenever they meet and would always try to beat each other at everything.Nym hates being compared to Jasmin and will immediately/angrily deny any comments that involve the two girls being similar.

Cousins who grew up together,Nym often looks down on Rid and never hesitates to mock him.Rid on the other hand often teases Nym about her love of stuff animals and annoys her about accepting Izrail Paku as her future brother-in-law.It is shown that the two cousins work extremely well together in a fight.Overall they do care for each other and can be rather protective of the other.

Nym's personality is based from Ichigo Kurosaki of Bleach,Hildegarde of Beelzebub and Ciel Phantomhive of Kuroshitsuji.

Nym's appearance is based from Suigintou of the Rozen Maiden

Nymphadora:A nymph in Greek mythology is a female minor nature deity typically associated with a particular location or landform.

Satyresses:Female equivalent to satyrs, depicted with a human head and torso, generally including bare breasts, but the body of a goat from waist down. 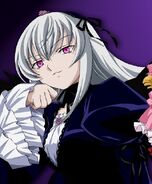 Nym showing her proud side 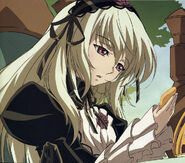 Nym thinking about her cousins 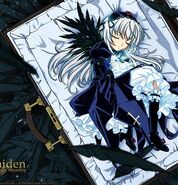 Add a photo to this gallery
Retrieved from "https://fairytailfanon.fandom.com/wiki/Nymphadora_Griffin?oldid=75904"
Community content is available under CC-BY-SA unless otherwise noted.