Wielder of 2 Unmei no Ken

"A Blade of Light, cursed by Darkness."

Parius Chitose (パリウス ちとせ Pariusu Chitose) is a powerful Mage, known more infamously as the Black Dragon, though he has yet shown his full power. Instead, he uses only his blades, Juuchi Yosamu, and Yawaraki-Te of the fabled Unmei no Ken, his Black Flame Magic, along with Death Magic. He is the Founder, and Leader of The Black Moon Squad. At one point, he became a teacher to Tamashi Kui, and Saya Komuro. Parius taught Tamashi a rare brand of magic, known as The Seals of Heaven and Hell. He is currently traveling with Ayashi, and is on a mission to destroy every Dark Guild in his path. The reason isn't known.

Parius is a somewhat carefree man, enjoying his life as it is. He has stated that he is incredibly loyal to any of his friends. He is prone to smiling, and is battle hungry as well. To those he initially meets, Parius seems a bit cold, but that is because of the pain of losing someone Parius couldn't bear. Nonetheless, Parius will remain a bit cold, but respectful, if the person has beaten him. On the other hand, make Parius angry, and he turns into a completely different persona.

Parius, when either made mad enough, or knocked out, will become his Black Dragon persona, in which he will retain his coldness, but also add in ruthless, calculating, and uncaring. While like this, Parius's eyes become slitted, much like a Dragon's. Parius just doesn't care about life while like this, and will do everything in his power to kill, or horribly injure, his opponent. Parius is aware of this persona, and sometimes, gladly gives in to the temptation of it, against opponents. Though, usually, he doesn't like to become it.

Parius has long, black hair, reaching a couple of inches past his shoulders. He also has blue eyes. He can usually be seen wearing a tight, black shirt, black pants, black boots, and a long, black, two tailed coat, with a hood. He can also, occasionally, be seen wearing a hat with long strands of what seems like paper. Though this is usually blown away, and the hat is somewhat expensive, leading Parius to not wear it. After the Time-Skip, Parius let his hair grow longer, reaching his back. He started wearing a similar outfit, in the vain of samurais, and he wears a headband, with a metal plate on the front. Parius, in a way, looks like Atama Chitose I.

Not much is known about Parius's background. However, the only thing that is really known is the fact that he is an infamous Assassin, known as the Black Dragon. He had slaughtered thousands of people, and took great pride in it. He even reveled in it. However, something happened, and Parius gave it all up. He vanished along the scattered pages of history. He only recently reappeared. No one knows why he has chosen now, but something is weird. There is no trail of bodies following him.

Fairy Tail:Rise of a Revolution

The Hunt: Evil of The Shadow Broker

Magical Power: Parius is a immensely powerful mage, and uses his own version of Fire Magic, called Black Flame Magic. He is also gifted in other Magic, though he does tend to use his blade for most of his fighting. When Parius releases his Magical energy, it comes off in a mixture of purple and black. At full power, Parius rivals the Saints in power.

Magic:  Parius's main mode of magic is his Black Flame magic. He is also skilled in Sword Magic, though the extent in currently unknown. what is known is that Parius uses his own brand of swordfighting. Parius is also quite adept with Death Magic, though the reasons are, as of right now, unknown.

Black Flame Magic: As the name suggests, Parius's flames are black in color. They are also hotter than normal flames, though Parius is immune to his own flames. This allows him the ability to use them even more effectively. He has mastered the use of these flames, and is one of the most skilled Flame Magic users.

Black Flame Styles: Parius has created two styles of fighting, based around his his black flames. The two styles are Pheonix Style, a defensive based fighting style, and his Dragon Style, a more offensive fighting style. He can freely switch between the styles at a moments notice.

Parius knows two Death Magic spells, and is able to use them, quite handily. He has created a third. He can also use these, while in any of his sealed states.

Speed Magic: Parius is extremely skilled in Speed Magic. To those not accustomed to it, he appears to dissapear. He is also skilled enough, in order to produce after-images of himself. It is one of the more known facts about him, from his Black Dragon days.

Master Swordsmanship: Parius's main weapon of choice are his blades. As such, he should be considered a Swordsmanship Specialist. Parius has trained for days on end, and has reached a level of mastery over both of his blades. He is a master of both one, and dual sworded combat. He can easily pull out one of his blades, slice a target, sheath the weapon and walk away as if nothing had happened. He created his own style based on this mastery, known as One Path Cuts into Two. It refers to how Parius usually only uses one blade, but can quickly switch to two blades. He is also masterful of Sword Based magic, and has come up with his own, custom spells.

Expert Hand to Hand: Parius has shown an expert-level skill in hand to hand combat, though he has stated it feels to heavy for him, and he would much rather stick to his swords.

Master Strategist: Parius, while fighting someone, will be able to read his opponents movements, breathing, and muscles. This allows him to create strategies in order to fight against said opponent more easily, and much more quickly, if Parius feels the need. However, outside of battle, Parius is capable of coming up with strategies as well. He is able to plan, and counter other's plans. His favored methods are small, confusing

Enhanced Reflexes: Parius is quite nimble on his feet, and is able to dodge most attacks quite easily. This is relative to his ability to read his opponents muscles, breathing, etc. Parius can still fail to dodge an attack, if it is fast enough. When Parius augments his speed with his Speed Magic, he is easily able to dodge almost any attack thrown at him.

Enhanced Strength: Quite contrary to his appearance as a lean, speed fighter, Parius is immensly strong, able to easily block the swings of a huge blade weilder, which are usually exceptionally strong. He can break bare stone easily by punching it, and his kicks can knock an opponent back several feet. His Meteor Impact is another testament to how strong Parius really is. However, he tends to hold back when fighting anyone he views as weaker than him, not utilizing his strength to its full degree. He only unleashes it against those he know can handle it.

Enhanced Durability/Stamina: Parius is able to take immense amounts of damage, and keep fighting well beyond that. He credits this as the fact that he is "too stubborn to die, let alone get seriously hurt." Also, becuase of his immense Magical Power, Parius can fight for hilariously long amounts of time. He does find that fact quite funny, as Parius usually tries to end a fight as quickly as possible, with as little damage to himself as possible as well.

Juuchi Yosamu: Parius's main weapon, it is one of the 10 Unmei no Ken, making him apart of the Swordsmen of Destiny

Yaweraki-Te: A pure white Katana. It can heal Parius's injuries, and the injuries of anyone Parius sees as an ally. Another Umnei no Ken weapon. 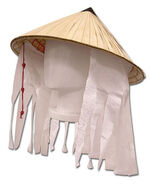 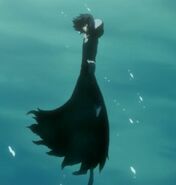 Parius Post Time-Skip
Add a photo to this gallery

Retrieved from "https://fairytailfanon.fandom.com/wiki/Parius_Chitose?oldid=279410"
Community content is available under CC-BY-SA unless otherwise noted.