" Now don't get the feeling that I'm mad at you... It's just that I hate anybody to skip around town in a jazzier costume than mine! Yeah, you heard it right! It's a costume not an outfit!"

"I said, You're welcome. Sorry, I may have laryngitis."
—Ray Tyler

Ray Tyler (レイタイラー, Rei Tairā; lit. "Ray Tile Maker") is a light hearted, strong and young mage and is one of the few remaining Mage's of the now destroyed "White Heart Guild" originally created by his great-grandfather far in the North-side of the world; very close to the pole. After losing his family and being betrayed by his friend, Ray left the extremes and traveled across the globe for an entire year until he finally decided to settle down in Fiore. Originally born to a slave woman named Aurora, Ray was conceived during Aurora's master's happy time with her and even after his threats, Aurora chose to give birth to the child and asked her friend to take care of his and raise him as his own but unknown to her, as she returned to the live of slavery, Ray was sold to a rich-couple who failed to have their own children and later the couple "officially adopted" the child. This would later on start a chain of events which led him to become a mage and join the White Heart Guild.

After the destruction of White Heart Guild, Ray took up photography and became a professional photographer who would shoot models and actresses to earn his living. His job thus allowed him to easily travel the globe and after working for about seventeen months as a professional photographer, he quit his job to settle in a small rented apartment in Fiore and became a Mage once again by joining another guild. For a brief amount of time, he worked for a shadow organization as a covert operative who's main mission was to track a rogue/dark mage, Barthram Severne also known as "White Raven". It is here, he was given the code-name, Agent 10 (工作員十, Kōsakuin Jū) and worked as a spy for a few months before discovering that he was being used. He is also widely known for his usage of exactly seven forms of magic. Ray has currently joined a guild known as Purple Phoenix that serves as a replacement for the once great guild, Fairy Tail. 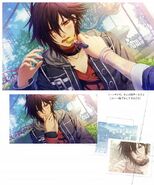 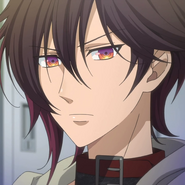 "Is this the past? The future? I can't tell but if this is the future, I must stop this child from ever being born!"

Several years before his birth a fortune teller an old lady (Claudia Amano) with the magical powers of precognition, fate perception and probability control had a vision where she saw the distant future (middle-aged) version of Ray Tyler standing over what appears to be a destroyed city with blood dripping from his hands and tears in his eyes. She assumed that this child would grow up to be a threat to the world and began searching for his parents. A few months later, she found a book of a deceased old and wise Sage describing that a child would be born twelve years after the time she was living in and bring about a great change in the world, so much so that he will change way the people think, forever.

Couple of years later, she had the vision of the same child saving the world from an undisclosed disaster and was finally was convinced that he would indeed be a "child of prophecy". But, these visions completely stopped until the day, she met a slave woman named Aurora pregnant with a six months old baby boy. Even when in her womb, the old lady known as Claudia could sense a great amount of magical power being radiated by this child and that's when she knew that she will have to look out for this so called child of prophecy since her slave mother obviously won't be able to raise him properly and this actually was the real beginning of the path that Ray though he chose but it was all part of a grand plan of the universe itself; for his destiny had been created and certified by life itself several centuries before he was born.

Nicola: How is this even possible?

Aurora: I don't understand either, maybe it was God's will.

Nicola: Truly magnificent. If what you say is true and this child is fatherless...

Nicola: You just dropped into a magic pool and poof, a baby?

— Nicola and Aurora about how Ray was conceived.

According to his unnamed "father", Ray was actually conceived by his slave mother Aurora when she was physically comforting him and despite his disapproval, she gave birth to the child. However, this was not the case. One night while working in her master's house, Aurora realized that they needed water and as she attempted to fetch water out of the well in the pitch black darkness of the night, she actually slipped and fell into the well. Soon after regaining consciousness, she realized no one was coming for her, so she continued walking until she finally found an underground pool and as she was thirsty, she drank the enchanted water's of the pool known as the Lazarus; which normally has the power to restore, vitalize and energize people and in rare conditions, give non-Mages the temporary ability to wield magic but the Lazarus had been corrupted over the years and as Aurora decided to bathe in it, as her body came in contact the waters, they caused a chemical reaction and after her bath, Aurora felt weird but she continued to walk towards the light source as she finally got out through the entrance of a cave and returned to the surface. Months later, she discovered that her little adventure has actually caused her to be impregnated.

In a vision during herself, she saw a spirit who explained to her that the pool's magical powers had initiated a magic based parthenogenesis and as such, she was impregnated the moment she started bathing in the pool. The spirit explained to her that her child would bring peace to all lands and free other slaves like her in the future. Determined to now protect and raise this child, Aurora contacted her only friend Nicola and made a deal with her. However, after Ray's birth, Nicola did not keep her end of the deal instead she sold the child to an old lady who in turn sold Ray to Josiah and Anna Tyler. It was later revealed that, the old lady who sold Ray to Josiah and Anna was actually Claudia and she explained this was the only way for Ray to live. Years later, Claudia after becoming a spirit contacted Ray and told him his birth-name, D'anton.

A few months after illegally possessing him, the Tyler's officially adopted him and named him Ray Tyler. As their only child, Ray was not only given the best of everything but also was treated with strict discipline and was taught high moral values and lessons. Unarguably, his mother was very protective of him, if not over-concerned for his well being. He grew up competing and his only goal was to win in every competition and stand out as the most brilliant participant in every field but most of all, his personal goal was to impress his father.

Path of a Leader

Teleportation Magic (瞬間移動の魔法 Shunkanidō no Mahō): Teleportation Magic is a Caster Magic allows the user to cover very large distances in the blink of an eye. It makes for an extremely fast and effective means of transportation, and can also be used in combat when the situation requires fast actions.

Sword Magic (剣の魔法 Ken no Mahō) is a Holder Magic involving the use of swords.

Retrieved from "https://fairytailfanon.fandom.com/wiki/Ray_Tyler?oldid=319388"
Community content is available under CC-BY-SA unless otherwise noted.