Red Hawk ( Reddohōku) is a team of the famous Hydra Head guild being one of its most active teams. Its leader Damon D. Draco is a prominent member of Hydra Head who reunited many independent mages he found and became his friends.

They are the main protagonists of Breakdown and also of Uprising. They also play a big role in Red Hawk, are labeled legends in Verse and are foreshadowed in Ghosts.

Caravan rarely used by the team. 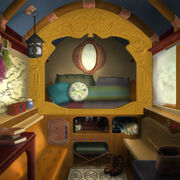 The Team's Submarine
Add a photo to this gallery

Retrieved from "https://fairytailfanon.fandom.com/wiki/Red_Hawk?oldid=528958"
Community content is available under CC-BY-SA unless otherwise noted.