Start a Wiki
Rin Yoichi (倫 洋一 ) is the 12th chair of the Toranku 15 located in the world of Hylion. He is a powerful mage stationed at Lysiloma accompanied by a Kawari named A-on who is an Altered Kawari with Sealing Magic that keeps his actions in check. 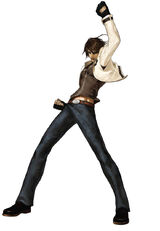 Rin is an overconfident and quick to anger, kind of person that will do everything for his people. He may come off as rude and egotistical at times, but he is extremely kindhearted never standing by when someone is in need, even if he usually doesn't take the credit or if he earns the scorn of his fellow members.He will usually speak his mind, but knows to read the atmosphere and control his actions.

He is not one to stay in one place so he spends most of his time walking his city. Talking to the inhabitants of Lysiloma with A-on at his side. Who Rin has come to treat as a great friend, no matter how many times they may argue.

Rin was born in Lysiloma and experienced the wonders the city had to offer just like everyone else. When the time came to pick a representative once more, Rin had already proven to not only be strongest in the city, but one of the most respected. His generosity and his fire to help those in need won him the election by a landslide. Though he does have quite a few kinks to work out like, brawling with people who threaten his city or causing too much damage around the city because of said brawls.

Brawling: Rin has immense experience as a brawler fighting would be aggressors many a times. While he does know martial arts and does incorporate them into his magic, a good all street fight is what excites Rin the most. Fist and kicks flying, bodies being thrown around, fighting to test his strength is what grants him such a smile each and everyday. He is capable of fighting multiple enemies at once and still be able to observe all their movements to gain the upper hand when he needs to. Rin uses his fists and feet equally, or better said, his whole body is a weapon coming up with ridiculous strategies to get ahead and get him the win. Like any brawl, Rin is capable to take as much hits as he can dish out, maybe even more.

Immense Strength: Rin's strength is in a whole another level than regular mages. He could destroy steel with his barehands, create large craters in the ground and pick up objects of massive weight with ease. While he may not have the appearance of being a muscled brute, with rippling muscles, he is definitely a monsters when it comes to pure strength. This has also allowed for his muscles to be able to harden to something stronger than steel. Even simple blades could be blocked with his bare muscles. This does not mean his skin is always hard, for it does take concentration to harden his muscles when ever he needs to. His greatest feat of strength would be when he stopped a rampaging wyvern charge with one hand and them proceeding to knock it out with a punch.

Immense Speed: Rin is capable of darting about a room almost instantly making it look like he is in multiple places at once. This being incredibly useful when fighting multiple enemies, as it seems he is able to attack a large group in a flash and usually before the enemy has any time to react. This speed can be increased further by using the heat around his body to use as a boost. This does cause his flames to leave imprints on the floor of his feet where ever he moves to.

Outrages Magical Power: Rin has a massive amount of magical power at his disposal, even being able to manifest it to a visible substance when gathering his magic. While his magic is being manifested it causes a stiffling atmosphere, while making those that can't handle it pass out. Like of they were exhausted. He has been able to use his spells consecutively for an extended amount of time, including big spells that take up lots of magic.

Intellect: Though Rin is not particularly smart, he sometimes shines through moments when help is needed most always trying to fight for his people and city, making sure trade, commerce and treaties are upheld to the best of his abilities. He is incredibly knowledgeable about different types of magics and is always learning about the political issues of Hylion through the help of A-on. The one time Rin shines most would be during altercations or plain out fighting as he is a gifted fighter with great experience that he has gained through the countless fights he has been a part of.

Movement Reading: When fighting, Rin is capable of looking at a person as a whole, but pay attention to all the minor details the body will show, like seeing slight muscle movements that allow Rin to predict where his opponent will go next, or how they will attack predicting their trajectory with a monstrous accuracy. This allows him to stay steps ahead of his opponent during a bout.Rin is also able to forcefully increase his heart rate with the use of his magic controlling the heat within his body. This allows adrenaline to build up, thus his accelerated state allows him to perceive things in slow motion. This however doesn't increase his reflexes or increase his speed in anyway, but it is extremely useful for stopping attacks before they happen or slipping through a barrage of attacks do to his reaction time increasing dramatically.

Rin has amazing control over the element of fire. He can create his flames either from his own body or by controlling the kinetic energy of magical particles thus allowing him to create it from almost anywhere. Rin can manipulate his flames in a way he could shape them into many forms as he is able to use the sub magic Fire-Make to do so, with his imagination being the only limit. Rin is able to manipulate his flames to move in any way he wishes either moving them freely or using hand gestures. His flames can also take on a solid or gas form allowing him to create strong blunt attacks that can also burn his opponents or creating large mists that would severely burn anyone trapped inside. The intensity of his flames are so great he could create them in the most harshest of weathers, melt ice with ease and even create his flames under water. These of course being natural and not magical as some magic attacks could cancel out his flames. He is also able to change the color of his flames to anything he wishes, but with no added affects like Rainbow Fire. Just like all other elemental wizards, Rin can turn into his element. He could use this form to escape tight spots or go through objects and reach spots one would not be able to reach or go through by regular means. His flames also have the ability to absorb flames into them increasing their power further. This of course also means he could use his flames to absorb other magical attacks of the same element. This only works if the attacking spell is weaker then his own. Absorbing the flames will not heal or restore his magic in any way, but they will increase the intensity or quantity. Like many other fire mages, he also has great control over heat, being able to increase the temperature in an area to his liking. Rin can withstand the harshest of weathers do to his inner flames and manipulation of heat. From unforgiving cold weather to scorching temperatures.

A-on is an Altered Kawari with Sealing Magic. and the one in charge of keeping an eye on Rin. Though some might think that it is just a job, A-on has become a great friend to Rin and both see that Lysiloma and all of Hylion remain peaceful. 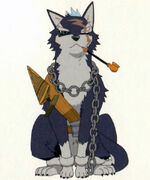 Maximillion is Rin's dog that he found as a stray when he was just a pup. He travels everywhere Rin and A-on go as they are the only two, Max ever listens to. He isn't hostile towards other people, but is indifferent towards others. He carries around a dagger on his right shoulder that he actually uses to fight against his foes he may encounter as he fights along Rin most of the time.

Retrieved from "https://fairytailfanon.fandom.com/wiki/Rin_Yoichi?oldid=375284"
Community content is available under CC-BY-SA unless otherwise noted.