Ryo is a Fire Dragon Slayer and partner to Vice.

Ryo has black hair which is always seen in it's characteristic forward curls. He has been seen wearing a uniform along with an orange baseball cap pulled backwards. he wore a sleeveless dark blue shirt, along with white pants and tennis shoes.

Ryo is at times very cocky and overconfident, believing he can defeat any opponent, which has caused some friction between him and his friends, most often Sasuke Akechi.

Despite his hotheaded demeanor, Ryo is not above showing compassion, even to his enemies. This especially holds true for those who he sees have encountered similar hardships as he has, such as Ray Martinez. This trait has also lead to him befriending former opponents who have in turn become his allies and friends.

Ryo was raised by an unnamed fir30e dragon on the continent of Gran Soren. As a child Ryo believed himself to be a dragon. He loved his father very much and enjoyed all of his teachings. By the time he was 8 he wondered why he still hadn't grown any wings, scales, or horns yet. It was around this time that his father explained how he found Ryo as a baby and how he was human. Angered by the truth Ryo ran off. After two days Ryo returned to find his father gone. Believing his father had left because of his action Ryo's heart began to ache as the fear of never seeing his father again began to fill his head. A few months of living in the wilderness alone and Ryo had finally made the decision to move into the city with other people. 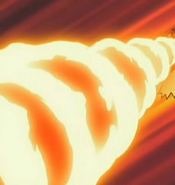 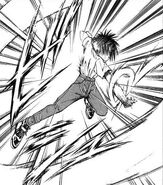 Fire Dragon's Gatling Roar
Add a photo to this gallery

Retrieved from "https://fairytailfanon.fandom.com/wiki/Ryo?oldid=127148"
Community content is available under CC-BY-SA unless otherwise noted.