Seeker (シーカー, Shiikaa) is a mysterious young mage who claims to be a member of the group known simply as 7, under the code name of Gluttony
(グラト二ー, Guratonī). He acts as the advance scout and intelligence operative of the group. He uses a form of magic known as Glutton, that allows him to sprout mouths from any place and eat things and recycle them for his own use.

Seeker is a fair skinned young man with slanted blue eyes and very long blond hair which he wears drawn into a half ponytail with the rest hanging down freely. A bang falls over the left side of his face, covering his left eye and the scope he sometimes wears. Due to the effects of the maigc that he uses, he has mouths in each of the palms of his hands. While attempting to master the powers of this magic, Seker managed to blow away the elbow of his right arm and needed to undergo surgery to save his hand. What was left of his right arm was reattached, with the part destroyed in the explosion being replaced with a transplanted arm. The transplanted elbow is dark brown in color and has several wrinkles on it. He has another prominent scar on his left arm, completely encircling his arm at the biceps. This scar was a result of his father's attempts to hack his arm off after he mistook it for a devil's arm upon seeing the mouth that had appeared on his palm. Though not known to most people, he has another, much larger, mouth on the left side of his chest. This one is kept stitched-up as Seeker does not yet have complete control over it and if left open it would repeatedly eat his shirt, reducing it to shreds.

He is normally dressed in a V-neck, sleeveless, midriff shirt, worn over a piece of mesh armor. Along with this he wears dark pants, stirrups, and sandals. He also wears a utility belt on his waist, within whose pouches he stores his clay. Over the shirt he wears a long, dark cloak with a red interior and a chin-high collar. The cloak has a red line running down the center and a pattern of red clouds on it. He also wears a teal colored ring on his right index finger, and black nail polish on his fingers and toes. He is also often seen with a forehead protector worn on his head, that also helps to hold back part of his long hair. 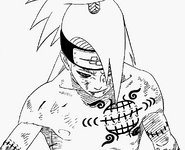 The sewn up mouth on Seeker's chest.

One of the mouths on the palm of Seeker's hand.
Add a photo to this gallery

Glutton (くずり, Kuzuri): Seeker's trademark magic, Glutton resulted in him sprouting three extra mouths on his body, with the ability to sprout additional mouths from any other place if he so desires. Using the three mouths he can eat virtually anything and recycle it to create explosive clay and then mould it into various shapes and forms that he can control. He can even change the properties of the clay he creates, making a less potent non-explosive kind of clay if he so desires. The three permanent mouths appeared on the palms of both his hands as well as a larger one on his chest. These three mouths are the only ones that can be used to mould the clay, the other temporary ones can only consume things.

The greatest use of this fruit is born from the explosive nature of the clay, which allows him to create bombs of various shapes and sizes, as well as of varying strengths. He can even mould animated dolls made out of the clay that resemble animals. So he can mould the clay into the shapes of birds, animals and insects and use them for scouting purposes, helping him greatly in tracking and following a target, or even for information gathering as any information gathered by the animals is shared back with him. Thus he can see what they see, hear what they hear and even smell and sense environmental conditions through them. These dolls retain the abilities of the creatures they where modeled after, i.e. those resembling birds can still fly, spiders can spin webs made of the clay they are born from and so on. He can also create "living bombs", creatures made out of the explosive clay and by imbuing his magical energy into them, can be remotely controlled by him and made to travel over great distances and explode at just the opportune moment. This makes Seeker particularly effective at long range combat, as he can use these living bombs to create explosions without him having to get in close with his target.

But while these various animals alone make Glutton a very versatile and dangerous magic, its true powers lie not with what it can crate from recycling what it has consumed, but what the mouths can directly do. The explosive nature of the clay is born from the explosive nature of his saliva, which can in turn be imparted to anything the saliva comes in contact with.

Seeker has come up with various animals that he creates for different purposes, ranging from transportation to scouting to bombardment, all depending on the size of the animal in question and the strength of the explosives with which it is made.

Retrieved from "https://fairytailfanon.fandom.com/wiki/Seeker?oldid=224791"
Community content is available under CC-BY-SA unless otherwise noted.