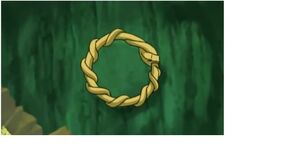 The Serpent Ring, is a magical artifact created by Apophis Serpentenes. It possesses the power to transform humans into snakes, and is the lynchpin to Apophis' Hour of the Serpent .

The Serpent Ring appears as a large golden ring resembling a snake biting its tail. When in use, it glows green, and dark green magic glows in the center. Green snakes then emerge from the center. The snakes then bite their victims, beginning the transformation. Apophis suggested that the Serpent Ring may possess a certain will of its own, as it only ever responds to Apophis' desire. When using it, it levitates in the air beside Apophis.

The Ring is capable of transforming humans into snakes. The snakes can then be swallowed by Apophis, thus adding their power into his own. This does not grant Apophis their abilities though, and instead makes his own abilities stronger. The people Apophis swallows are not dead, but are sealed inside of him. Apophis is capable of releasing them if need be, and can also change them back into human form. There are a select few who are not affected by the Ring's power; Lucy was one of them, since her bond with Dark Spirits prevented its power from influencing her.

The Serpent Ring's power is directly linked to Apophis' being. The more strength Apophis gains, the more powerful the Ring gets, and the more power the Ring absorbs, the stronger Apophis becomes. Unfortunately, this also means that if the Ring is every damaged in away, it harms Apophis as well.

The Ring also grants Apophis a certain level of control over his victims, though this level can vary depending on who he is trying to control. It does not respond to anyone but Apophis, and attempts by someone else to use it can have painful results.

Apophis built the Ring out of his own power, placing a piece of his own being within it. When he first completed it, the Ring was not particularly powerful, but as Apophis consumed others, it began to slowly gain power. Apophis continued to seek power, intent on making the Ring strong enough to coat the land completely in its power, and transforming all people into snakes.

Retrieved from "https://fairytailfanon.fandom.com/wiki/Serpent_Ring?oldid=205201"
Community content is available under CC-BY-SA unless otherwise noted.