Haru (春 Haru) is a member of Shūryō. He is one of the older members in the guild, and a former Subordinate of Paradonix. During his time partnered with Paradonix, he assassinated anyone without remorse, because Paradonix convinced him that the people he was sent out to kill had committed horrible crimes, and should be punished. After finding out Paradonix's true intentions, he defected, and joined Shūryō.

Hillari Zynth (ヒラリーツィンの目 Hirarītsu Innome) is the bartender of Shūryō. She was a experiment of Paradonix, and due to excessive experimentation, she cannot see. After narrowly escaping from her death, Hillari was found by Setsuna and Sasuke during a mission. She was then taken back to Shūryō to be the bartender. After getting used to where everything was, Hillari was able to serve drinks and food. 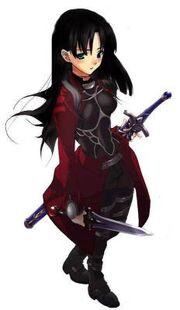 Helen Sparks (ヘレン·スパークス Heren· Supākusu) is a member of Shūryō, and was once a Subordinate of Paradonix. Due to her intelligence being lower than what was expected, she was sent on a fake mission to be assassinated. However, Setsuna was able to save her life, and tell her the truth about Paradonix. She then convinced Helen to join Shūryō.

Retrieved from "https://fairytailfanon.fandom.com/wiki/Sh%C5%ABry%C5%8D/Minor_Members?oldid=201823"
Community content is available under CC-BY-SA unless otherwise noted.