Simone the Lion King is a Beast King and is a member of the Octanimal Kings of Council. He is a user of Fire Magic and Fire-Make spells and is also a skillful sword user. He is best friends with Tenma the Monkey King and dislikes Cornelious the Rhino King.

Simone has a highly intimidating appearance, he is very muscular and has a look that could even send chills down even the bravest of people's backs. He has grey hair on his main and wears a red and black hat on his head. He also wears a black coat with red insides, which he leaves open most of the time causing his pink X shaped scar to be visible. He also wears white tape around his wrists and complete's his outfit with black pants and a black belt.

Enhanced Strength: Simone is physically one of the strongest Beast Kings, next to Cornelious and Krag.

Master Swordsman: Simone is very good with a sword, however not as fast a Slips, He is able to unleash powerful slashes that can cut through solid stone.

Immense Magical Power: Simone's magical power (just like all the other Octanimal Kings of Council's) soars above most of the S-Class Mages in Earthland.

Fire Magic: Simone is a highly experienced user of Fire Magic. He is able to manipulate unique flames that burn with an intensity that is even higher than that of an experienced Mage. Simone is able to also use his sword to help manipulate the flames and pull of dangerous sword techniques that involve flames.

Fire-Make Magic: Simone is also a user of Fire-Make Magic. He is able to use his immense capacity of magical energy in order to create flaming constructs such as arrows and even a mini-sun.

Sword of Metazoa: Simone has the Sword of Metazoa in his possession. It is a powerful refined sword that was made out of various materials found within Metazoa. The sword is very large and is said to have magical properties.

Apollo's Armour: Simone also has a powerful set of armour called Apollo's Armour. This mystical armour is made from an unknown material that enhances any magic that produces flames. 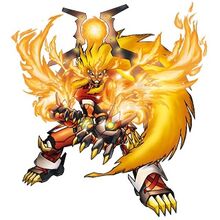 Retrieved from "https://fairytailfanon.fandom.com/wiki/Simone_(Beast_King)?oldid=393864"
Community content is available under CC-BY-SA unless otherwise noted.