Siren Magnolia (サイレンマグノリア, Sairen Magunoria) is a young mage and well known to the popular Floral Mage Weekly magazine as a talented model, gardener, and mage. She adores flowers and is known to be an advanced wizard in plant magic, yet people are unaware of how in tune she is to plants and plant magic as a whole. Her signature magic deals with transforming her body into roots with lilies sprouting from them, use plant sensory magic, and being able to transform most any part of her body into roots or flower petals that she can manipulate freely. She is known to not be the violent type, and dislikes fighting with her magic. If she does use magic for offense or defense, she prefers hair magic if it's an opponent she can easily handle. When in serious danger, plant magic is once again her forte. She's nicknamed "Weeping willow" for her use of willow roots, and "Blighted love" due to past failures in relationships with famous Sorcerer Weekly figures who she dated as publicity stunts arranged by modelling agents.

Siren grew up with a normal childhood to rich parents. As a result, she didn't know much of real life or the outside world once she was older. She wasn't the spoiled type to act out, and kept a gentle, calm, yet fragile demeanor. She preferred plants over business, finance, or dressmaking that her parents wanted her to learn, and upon turning 18 - had harnessed her plant magic to perfection (in her standards); she was then was allowed to wander out on her own due to her parents seeing her prowess as a model and mage, being understanding, yet still reluctant on the inside. Siren was asked to become a model focus for a lesser known magazine called Floral Mage Weekly which got the magazine, and her, great publicity. She was courted by many a male model from Sorcerer's Weekly, though, they all were all publicity stunts which she knew full well going into them after being informed from her manager; but due to her sensitivity to emotion, she made the mistake of caring too much and growing attached. All of her relationships have ended on good terms and many of the male models talk fond of her, yet stay out of the way when Kenny Realight decides to get malicious towards the new upstart. She most often catches the attention of the Blue Pegasus Guild and especially, Hibiki, which hints Jenny's motivation to destroy her career. Hibiki even offered her a spot in Blue Pegasus, but she denied shyly with the statement, "I'm not a fighter, I'm a lover. I couldn't join your guild." which only seemed to encourage the boys more.

Siren is a very gentle and sweet individual who dislikes being violent and violence in general. She is confident in her magic and modelling career, while timid and fidgety off camera. She's often called "cute" by others to which she's easily embarrassed and flushed from hearing it. She's known to bloom brightly on the pages of her magazine, and comes to life there more than anywhere else = since she grew up modeling for her mother's business of selling dresses. Siren was often shy as a child, but grew to be very independant and caring, while being easily trusting of others; too trusting even. She's known to have previously gotten herself into tight situations for others' publicity stunts with Sorcerer Weekly male models in hopes of finding someone to care for her truly which they do, but not in the way she imagines; this in turn being shows how misguided she is of the concept of "love", and she's oblivious to thinking anyone would harm her when she herself wouldn't think to harm anyone herself. Siren is openly called a "bimbo", by Jenny Realight, for all the hopping around in Sorcerer Weekly, regardless of people knowing the truth. Miss Fiore herself often brings her down, which led Siren to dislike herself and not believe she is beautiful enough for any man to truly love her no matter their compliment. She is known most of all for being innocent, shy, loyal, introverted, misguided, and oblivious, independant, and confident on camera; she's also believed to not have a conscious due to her lack of focus, yet she's actually very intelligent in the matter of flora and fanna, as well as hair, and honestly, many intermediate magical topics.

As a model, Siren is known well for her features. She's coveted for her large chest, natural and fair skin tone to which she wears no make-up, her soft pink hair that she wears down long with a large curled bang to the right side and a shorter one to the left that doesn't cover her eye, blue eyes, as well as her appearance is often described as beautiful to many in the modeling society while she doesn't wear skimpy outfits in her magazine. Her main attire consists of a peach top that starts from her neck and v shapes to her chest, ends at her upper belly, and has two blue lines from the middle to the botton of the top, and side to side, baggy jean-like matcha green pants, a nude colored undershirt with fishnet that covers her stomach with cool blue toned boots, and most notably known for her signature blue lily decorating her white headband which is tied to the left of her head with matcha green beads strung on it. 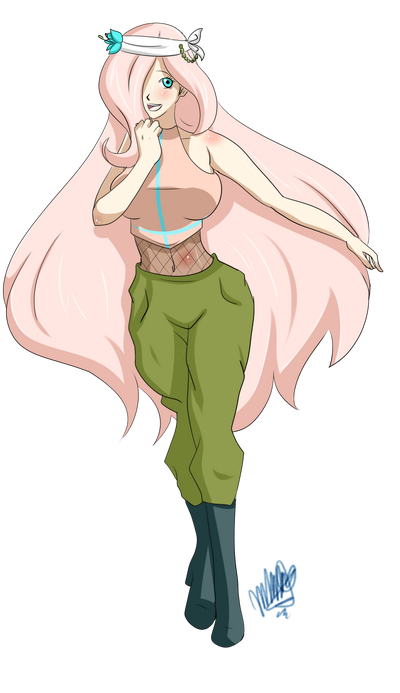 Her siren appearance consists of vivid blue scales and wispy faded blue seadragon fins with decorative patterns along her scales and various parts of her body like her wrists, ear, and her bangs. She wears the same top she wears as a human as it's water proof fabric and takes off her pants and boots to transform.

Plant Magic (プラントマジック Puranto Majikku) is a type of Holder and Caster Magic that utilizes various types of plants. Plant Magic allows the user to create and manipulate plants of different variety.

Flower Magic (花の魔法 Hana no Mahō) is a Caster Magic and a variation of Plant Magic utilized by various mages throughout Fiore.

Plant Sensory Magic is a very advanced form of plant magic that can only be acquired through truly pure connections between plants and a human who admires them to the highest extent and understands them thoroughly. Plants are known to be able to actually sense light, remember short term information regarding light patterns, react emotions and negative intent, as well as be able to communicate amongst other plant life that could be miles away to alert them of danger; plants can also seemingly hear as well.These abilities plants seem to have with Siren allows her to understand plant life on a whole other level as if she herself were a plant. She's able to utilize and communicate with plants telepathically to read into their natural abilities to sense danger and so on. In turn, through the enhancement of non harmful magic, Siren is well aware of weather, far off or close threats, others' emotions, and hear different things such as caterpillars munching on leaves, or conversations near any particular plants she is focusing on; it can also be many plants in a wide radius, but it doesn't mean she knows all, hears all, and/or sees all.

Binding Willow Roots is a magic attack in which Siren either manipulates roots of trees around her, or most often, uses herself and transforms her legs into roots and sends them after opponents to bind them. This can also apply to roots from her hands or hair as well.

Floating Lily is an ability which makes Siren's lily large enough to sit on and ride down rivers or in the sky, similar to a flying carpet.

Crystalline Sap Pod is an ability in which Siren roots up a large root and a lily blooms at the center, creating a barrier around the opponent similar to a crystalline substance and keeps them trapped. It's weak to high frequencies, fire, lightning, and wind or sky magic. where Plant Transformation is an ability in which Siren allows her body to become willow roots blooming with lilies, or flowers and petals to use in various magical techniques or to enhance the photogenic scene of her magazine covers and pages.

Weeping Willow is an illusionary ability which makes the target believe they're trapped within a large weeping willow tree.

Blighted Love is a continuation of Weeping Willow in which Siren wraps the victim in willow roots and their imagine their bodies decaying into soil and plant materials.

Lock Whips is and ability where Siren uses her soft pink locks of hair as whips to repel enemies away from her.

Locks of Love is and ability where Siren wraps an opponents or target in her hair and attempts to knock them out from lack of oxygen upon compressing their airway while constricting the victim.

'Barrier Locks is an ability in which Siren uses her hair, strengthens it, lengthens it, and creates a barrier around herself to keep her from harm. Fire seems to very affective on this magical technique. 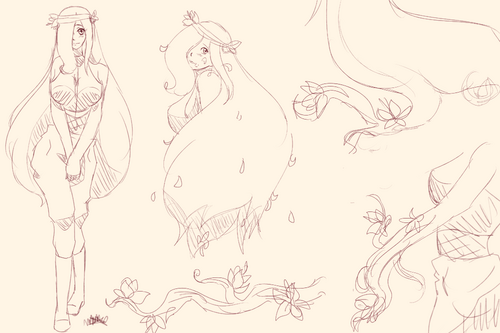 View Zone - Do plants have feelings?

Retrieved from "https://fairytailfanon.fandom.com/wiki/Siren?oldid=311846"
Community content is available under CC-BY-SA unless otherwise noted.