Sky God Slayer Magic, like all Slayer Magics, incorporates the element of air into the user's body, allowing them to produce black whirlwinds from various parts of their being, which are mostly used as a means of offense, allowing the user to generate and manipulate air in the form of spiralling black currents, which can be employed to assault foes with great effect, sending them flying away from the God Slayer with great blunt force. This form of Magic also grants the girl the ability to eat the oxygen present in the air around her to replenish her strength reserves. Lyon Vastia described Sky God Slayer Magic as "the sky's ultimate Magic", superior even to Sky Dragon Slayer Magic: where the latter is thought to kill dragons, the former, if correctly honed, is supposedly powerful enough to take down a god. The user is also able to cast healing spells, which are noted to be able to restore the body's injuries, whilst not being capable of restoring any internal fatigue or stress the body has been put through beforehand, which, in turn, must be restored naturally.

The user can manipulate air molecules to create winds of any strength, including tornadoes, and even siphon the air out of others lungs, enabling the caster to generate wind, as well as to manipulate the wind around them and their will, granting the user high offensive power, allowing them to assault enemies in different ways: the most prominent aspect of the ability lies in the ability to give the wind cutting properties, manifesting it in the form of fast-moving air blades which are employed at mid-to-long range; the user can also generate powerful gusts of wind to inflict blunt damage upon enemies and send them flying away, and even form hurricanes of various scales, which, in addition to their rotational power, seem to retain their wind's signature sharpness. The user can also employ the wind on themselves, using it to levitate and traverse over long distances, as well as to cover herself in an armour of wind, boosting both their offense and defense, allowing them to walk in the air with impunity, create pressures of enormous proportions, and manifest enormous air currents that are more than capable of large destruction.

These spells are unique to DC2 and Eve Paragorica. 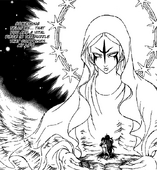 Retrieved from "https://fairytailfanon.fandom.com/wiki/Sky_God_Slayer_Magic?oldid=623024"
Community content is available under CC-BY-SA unless otherwise noted.