Spectral Armor (幽霊甲, Yūreikō) is a rare Caster Magic that utilizes the very Magic Power in order to create a kind of a powerful magical guardian, who is connected magically to the Mage and acts to any of their commands. The Mages, who make a use of Spectral Armor, are often known to be able to perfectly use their own Magic Power and the very Ethernano around themselves, as well as having the natural affinity for utilizing the power of Enchantment. Even though the Mages do not need the Enchantment knowledge to activate their specific Spectral Armor, with the power of Enchantment they can reach an evolution of their magical guardian and acquire the new power, bestowed upon them. Spectral Armor grants its users a myriad of abilities and surely give them the opportunity to become very strong Mages in their future. As the Rare Magic, it is also known as the one of the trademark Magic of Bernadotte Family.

It is a type of Magic which gives the user the ability to create a powerful magical armor. There are three variants of this spell, but each is unique. A crystal of lacrima is implanted within the user's body for the magic to work. Expelling magic around him, the person creates an aura of magical power which then expands and molds in a giant spectral warrior.

Below is a more detailed description of the three variants of Spectral Full Armor. 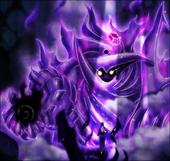 Retrieved from "https://fairytailfanon.fandom.com/wiki/Spectral_Armor?oldid=569862"
Community content is available under CC-BY-SA unless otherwise noted.