Take Over (接収 (テイクオーバー) Sesshū (Teiku Ōbā): Being Maximillian's student, Dante's primary magic is Take Over. It is also what gave him the epithet Phantom King. He is exceptionally skilled at it, one could say even more so than The Demon Mirajane herself. That is mostly due to his teacher, Maximillian who was the creator of the magic. There are two ways to use Take Over. One is to take over a being's power by using the knowledge of the one you want to use. The other is called The End.

Phantom Soul (ふぁんとむそる Fantomu Soru): Dante had encountered a weakened Mephisto, one of the demons that Zeref created. He had been weakened by his battle with Deliora. Needing to recharge his magic, Mephisto tried to take over Dante. It unknown how as of yet, but in their battle of supremacy Dante had been victorious.

A Side Shot of Dante's Phantom King

Mammon (まもぬ Mamonu): One of Dante's Full Body Take Over spells. Acquired by taking over the dimensional demon Mammon. It is Dante's most used battle Take Over. 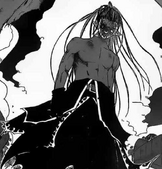 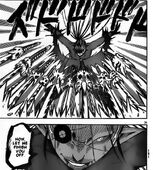 Stalker (ストーカー, Sutoukaa?) is one of Dante's Take Over spells. This form is primarily used for spying and reconnaissance purposes.

Exodia (えっくぞぢあ Ekkuzodia) is Dante's most rarely used full body Take Over. In order for it to be used, certain conditions must be met. For that reason, it's also called the Forbidden King (禁王Kinou).