"You hear that? That is the sound of thunder crashing. Your game is over! Now, we're in my realm!"

"Beautiful isn't it? My lightning against your Earth magic---some say... this is the stupidest thing I've ever done but then, I doubt you can ground my next move! I'm done playing!!"

Taranis (タラニス, Taranisu) originally known as Raijū Tenka (点火雷獣, Tenka Raijū; lit. "Ignition Thunder Beast") is the grandson of the great Demon Slayer, Sanki Kokuten and formerly a S-Class potential Mage from the future. In his time popularly known by the alias of Thundering Deity (鳴神, Narukami), Raijū definitely manages to live up to the standards of his grandfather. While in the present day, he does not have the memory or the level of magic that he used to due to the Sealing Magic used on him, he still is unarguably a very competent Mage. As of now, he has regained his memories and true powers and is currently known by the moniker of Asura of Black Light (あしゅらのブラックライト, Ashura no Burakkuraito), due to his newfound power. Recently, it has been revealed that Taranis is merely a clone of the original Raijū Tenka who died a couple of years ago. 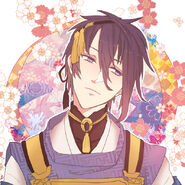 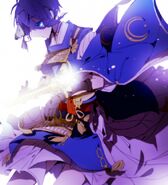 Self Rule and Resolve

Lightning Magic (雷系各種魔法, Kaminari Kei Kakushu Mahō): Lightning Magic is an Elemental Caster Magic that utilizes the element of lightning. Lightning Magic is the main form of magic utilized by Raijū; which has earned him the name of "Lightning Beast". Tenka's lightning magic is on par if not above a well trained S-rank Lightning God Slayer magic user. He possesses great control and mastery over this magic. Raijū's magic allow him to generate and manipulate lightning and electricity and even influence thunder to a limited degree. He can generate electricity from almost any part of his body as well as wrap his body in several layers of electricity, he tends to use lightning magic to enhance his maneuverability and further add the element of lightning to his already powerful hand-to-hand combat moves. The bright light from his lightning can be also used to momentarily blind enemies. He can also control the nature of his attacks and even solidify lightning or electricity around him to forge weapons out of it; although they tend to revert back to their natural lightning energy states only a couple of seconds later. He can also summon natural lightning to strike down his opponent(s) as well as absorb huge amount of electricity and lightning without taking any form of damage. It appears that he's immune to the effects of both electricity and lightning. Lightning Magic allows Tenka to turn his own body into lightning, in order to evade enemy attacks, move around at high speed and strike every opponent crossing his path. He can also breathe or exhale out a huge amount of white lightning from his mouth.

Thought Projection (思念体 Shinentai): Thought Projection is a Caster Magic. It allows Tenka to create a psychic copy of his body. This Magic can work even over great distances, allowing him to be at two different places or at the same place, at the very same time. His thought projection can physically interact with people and his surroundings and is seemingly very solid, even capable to taking blows from opponent(s) without reverting back to its holographic state. However, the thought projection itself has a very limited amount of Raijū's magic, thus making it easy to defeat it. Raijū mentions that he cannot create more than two thought projections at the same time, as its very taxing to his reserves; although he made this statement when he lacked the ability to access all of his reserves due to the seal.

Binding Magic (拘束魔法 Kōsoku Mahō): Binding Magic is a form of Caster Magic and Secret Magic wielded by various Mages. Binding Magic is a special caster type magic developed by Omizu Tenka who later on taught her son, Raijū this form of magic. Binding Magic uses supplementary spells which can immobilize an enemy or have an effect besides a direct strike. They may seem subtle, but these spells can give their users a tactical advantage when used properly. They can also repel small attacks as well as prevent one from using seals. Binding Magic can also be used to perform various seals. Somewhat similar to barriers in creation, but far more powerful and require far more preparation to create. Seals can only be used by those of sufficient Magic power and control and seals can either cancel out, seal away or hold off attacks. This magic can also conjure magical tubes which the user may manipulate and utilize in various ways.

Light Magic (光魔法 Hikari Mahō): Light is a Caster Magic that involves usage of the light element. Raijū demonstrated his ability to use magic by using it in conjunction with Lightning Magic to create White Lightning Rampage. Though, so far he has only shown the ability to cast a single spell.

Mark of the Demon

Skilled Hand-to-Hand Combatant: Taranis is a very decent hand to hand fighter although he is nowhere near the standard of his friend, Inhi Hachiman. He has shown to be skilled enough to rather quickly dispatch an assassin who tried to kill him whilst suffering from only minor injury. Taranis is also said to be faster than and much less forgiving than Inhi in combat and uses his enhanced-physical prowess to the best of his ability to overwhelm his opponents. However, Taranis prefers the use of great force and speed along with dirty fighting tactics over proper technique. Due to spending most of his life among bullies, Taranis is obviously a skilled street fighter though his skills are nowhere as refined as a Master Martial Artist such as, Sanki Kokuten. More recently, he was trained by his "grandfather" personally, in the art of blind-fighting thus improving his hand to hand combat skills. His fighting style is more straight forward and brutal than subtle and refined. Taranis also uses his Lightning Magic to increase his striking power or speed during combat.

Retrieved from "https://fairytailfanon.fandom.com/wiki/Taranis_(Clone)?oldid=331971"
Community content is available under CC-BY-SA unless otherwise noted.