It has been a few months since Hiro joined his big brothers guild Ura's Mercenaries. He quickly became acquainted with his new family laughing and enjoying his stay like he had been with them for years. Unlike the other members though, Hiro was not allowed to take on missions even if he could get someone to tag alomg with him. Ura had made it perfectly clear that until he shows results from the school K.I.M.A. he would not be heading out for missions,but instead he would be helping out Zaine in the diner and doing his school work. His first day of school was fast approaching. The days were going in a flash and before he knew it, he was one day away from starting his school life.

"I can't believe it's already here." Thought Hiro as he was holed up in his room looking at his calender on his desk, covered in black x's marking the passed days."What if im not ready? What if I can't understand the lessons? What if I'm just not good enough? Ura will never let me take a mission if I fail...no, I can do this. I will pass my classes become an official member of this guild and then some day become its master.but what if." A cluster of thoughts keept running through his mind as he began scratching his head from his nervousness. When all of the sudden he heard a knock on the door. Causing him to jolt up and lean back in a way that caused him to fall back with his chair. From outside a thounderous crash was heard and after a few seconds Hiro shouted "Coming!" Hiro opened the door and was met by Ura standing there with one brow raised and looking curious "What are you doing?" Asked Ura. "Nothing, nothing" said Hiro laughing nerveously. "Come on. We need to go." said Ura as he began to walk away. "Go? Go where?" asked Hiro looking quite curious and rushed out following Ura. After both made their way outside, Ura quickly created a light circular platform beneath them both, slowly rising them from the ground. Hiro was taken by complete surprise and extremely curious as Ura hadn't even said a word since they where outside his room. Hiro decided not to say anything either and just stayed quite for the ride. After a little while, they reached the deserts of Fiore. Somewhere near the middle, Ura decided to begin his descent towards the burning sands. On his way down Ura began to speak "Are you excited? School finally starts tomorrow." Hiro quickly responded "Yes!" Ura continued "good. Starting tomorrow I will be setting some new rules for you." Hiro looking surprised replied "What kind of rules?"  Before reaching the ground, they both stopped moving and stayed in place a few feet from the ground.

First: No one will wake you. No one will make sure you make it to school. That responsibility will fall on you and  only you. Should you miss even one day, You will not go on a mission, until you graduate.

Second: Should your grades fall and not at least meet the average, then the same thing will apply as the first rule. NO missions. And I will no longer train you and neither will anyone at the guild.

Your teachers are amazing people. They will develop your skills and knowledge and turn you  into an incredible Wizard. but that is only if you have the determination to. They will provide you all the tools necessary for success and if you can prove to me that you are serious about learning, then I will provide the experience. Hyuga jumped off the platform and into the sand. while doing so, the platform turned into a sphere trapping Hiro inside. "What are you doing?" questioned Hiro. "Stay there and pay attention. two days out of the week we will travel to different places and fight known monsters putting everything you learn into action." said Ura as the ground began to shake. From the side a Giant Sand Worm rose from the ground. 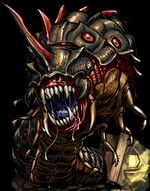 The sand worm screeching loudly began its charge towards Ura. "This beast is called Ogor. They live in underground tunnels spanning the whole desert. They usually only gather at the middle though." said Ura while lifting his right hand and facing his palm towards the charging beast. A gold magic circle flickered for half a second in front of Ura's palm and a sphere the size of the Ogor's mouth appeared surrounding Ura's hand. The giant beast bit down on the shield, but couldn't even scratch it. The moment the sand worm bit down, Ura used his spell Spike that caused numerous spikes to surface from the shield trapping the worm in place. The worm tried and tried, but couldn't get free from Ura's hold on him. "Now take a closer look and tell me what you see." asked Ura to Hiro. Hiro still a bit confused began to say "um....well....I see a Giant Worm?" Ura then began to say "how many legs do you see? Horns?Eyes? Any Weak Spots? Habits? When fighting the unknown, this are a few things you must learn to look for to better your chances of winning. Just from the shear size one would think that it is quite slow, but thanks to the extra legs it has, their speed is doubled. Did you happen to notice the eyes placed around the sides instead of the front. Surprise attacks are unlikely against him. What about how the top part of it's body is like armor while the belly side is soft. How about the Horns placed around his mouth and the giant one on his head. No one would ever think the horn would do more than stab it's prey, but in fact the Ogor has toxins in it's horn that can paralyze a person instantly. Ura let the beast go from his hold and then rushed I in an instant Ura appeared next to the beast and jabbed his index and middle finger into the side of the beasts mouth. The beast toppled to the floor motionless.

Retrieved from "https://fairytailfanon.fandom.com/wiki/The_Day_Before_The_First?oldid=346285"
Community content is available under CC-BY-SA unless otherwise noted.